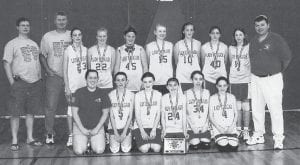 The Letcher County Cougars Girls’ AAU 12 and under team finished its season as runner-up in the state tournament with a record of 17-8. The team is coached by Kelvin Eldridge, Kenny Cornett, Keith Collins, and Abbie Adams.

The Cougars faced Knott County’s Fire and Ice in the final game of the Kentucky Girls’ AAU 12 and Under State Basketball Championship. The teams were very familiar with each other and had played seven times before the tournament, with the Cougars winning

four of the seven previous games. In the finals of the tournament, Fire and Ice led 23-21 at the half and went on to win 62-52.

The Knott County team was led in scoring by Kelsey Jacobs with 28 points followed by Whitney Back, 16, and Paige Slone, 12. Raegan King scored four points and Morgan Adams 2.