Letcher among many seeking airport 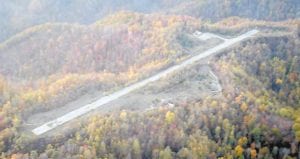 This photo of the old Whitesburg Municipal Airport at Colson was taken from the air recently by Brian Thompson and appears on the “Abandoned and Little-Known Airfields” web site operated by Paul Freeman – www.airfields-freeman.com. (Photo by Brian Thompson)

General aviation airports have opened recently or will soon in four Kentucky counties and plans to construct eight others are under consideration.

The Letcher County Airport Board has set 2011 as the target date for having a new airport in operation here. The 11-member board is now awaiting a decision by the Federal Aviation Administration (FAA) on whether the planned 4,000-foot runway, terminal building, and hangars should be constructed on a site at Stamper’s Branch at Isom, at Carbon Glow, or at the site of the old Whitesburg Municipal Airport near Colson.

The projects in Letcher County and elsewhere in the state reflect an effort to raise Kentucky’s status among states in the FAA’s southern region. With 60 airports serving 120 counties, Kentuckians have less access to airports than residents in the other seven states that make up the region, the FAA says.

“We’re trying to get back in the game,” said Paul Steely, commissioner of the Kentucky Department of Aviation. “We’ve made a lot of progress over the last three years.”

That’s a new priority for the state, he said, noting that until Gov. Ernie Fletcher added it to the Department of Transportation in 2004, the state didn’t even have an aviation division.

Steely said his office now has a $10 million budget, up from $6 million in 2005, that is used for airport construction and improvements.

Airports can take decades to build and can cost more than $20 million, although the Federal Aviation Administration can cover 95 percent of the costs for general aviation airports. State and local governments split the rest.

In the last two years, general aviation airports – which handle business, private and emergency aircraft – have opened in Whitley, Rowan and Crittenden counties. Hancock County plans to open its runway in December.

The Marion-Crittenden County Airport opened in May 2006.

“Last year, we had a tremendous amount of volume during deer season, of hunters flying in from all over the nation,” said James Johnson, chairman of the airport board. “The deer hunters use hotel rooms, they eat at the restaurants, they lease land from local landowners.”

He said it could take decades to see all of the benefits of the airport, but he’s already hearing of businesses interested in locating there. The western Kentucky county currently has three factories and its median household income is about $29,000, less than the state figure of $34,000.

In Oldham County, just north of Louisville, officials formed an airport board earlier this year to consider the feasibility of a facility there.

Lexington-based consultant ENTRAN, which is working with the Letcher County Airport Board, has said that a general aviation airport could feed $10 million each year into the area’s economy in the form of goods, services and wages.

“That’s the only reason in my mind why the airport board exists,” said Jonathan Westbrook, the airport board chairman. “If it was just about a place for people to take off and land planes, that doesn’t mean a whole lot to us.”

Opponents in some communities don’t want the planned airports.

“It would be more of a nuisance than a benefit,” said Louis Gentner of Henry County, who lives near one of the proposed sites for an airport in Oldham. “To me, this is something that should be put on a ballot.”

Before the Georgetown-Scott County Airport opened in 1993, nearby residents were concerned about those plans too. But James Toole, the airport’s current assistant manager, said he receives only three to four complaints every six months, mostly involving noise.

Brad Clark, a general contractor from Mississippi, said he flies to the Georgetown airport on his way to a shopping center he’s developing in Paris, Ky.

“We go all over this country building stuff, looking at real estate,” he said. “You can check out the health of a city by what kind of general aviation facilities they have. If they have a thriving airport, that’s a good sign.”

Letcher County officials and civic leaders believe a new airport is a key to attracting new business and industry here.

Among the services which may be offered at the airport are aircraft charters, flight instruction, aircraft rental, aircraft maintenance, air cargo, and aviation fuel services.

Information for this report was gathered by The Mountain Eagle, The Courier-Journal, and The Associated Press.