Letcher board still hoping field will be ready 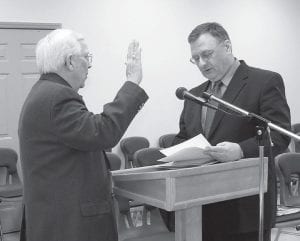 The Letcher County Board of Education is still hopeful that construction of the new baseball field at Letcher County Central High School will be completed in time for the baseball team to use the field before the season ends in mid May.

“There shouldn’t be any reason why the players shouldn’t play one game on that field,” said Will Smith, chairman of the board, at Monday’s board meeting.

Terry Sturgill, assistant superintendent of the Letcher County School System, said a tremendous effort is being made to complete the field.

“Progress is hard to see right now because it is inside the dugouts and in the concession stand,” said Sturgill.

Sturgill said the wet wintry weather has delayed work on the field area.

“It is a three- to four- week process once field work gets started,” said Sturgill. “I think it is getting shakier every day. We just need to cross our fingers for some dry weather.”

Sturgill thinks the LCCHS baseball team might be able to play five or six games on the new field.

In other news, Letcher Circuit Judge Sam Wright swore in John Spicer as a new board member. Spicer will complete the term of Attwell Turner, who died in December.

“(Mr. Turner) had always been a good school person. He was doing a good job as a board member,” said Spicer. “And I just feel honored to be able to come in and fill in for him and hopefully I can do a good job. I’ve been here the last two meetings and I have been really impressed with the way the meetings are being conducted. I feel honored to be here.”

Kenneth Cornett, director of pupil personnel, said the seventh month of the school year was the lowest attendance month because of illnesses and snow. The district attendance rate was 87.9.

“I can’t ever remember it being that low before,” said Cornett.

Cornett said the attendance rate is starting to increase.

Peggy Wilcox, an instructional assistant in the Letcher County School System, asked the board to grant classified employees four association days to attend the Kentucky Education Association (KEA) Delegate Assembly scheduled for April 9 through 11 in Louisville. The conference is usually the same week as the school district’s spring break, but the conference is one week before this year’s spring break.

Wilcox is president of the Kentucky Educational Support Professional Association (KESPA) and a member of the state board of directors with KEA.

Darlene Campbell, a teacher at West Whitesburg Elementary School, was named employee of the month.

Kelly Hall, director of curriculum and instruction, said the Commonwealth Accountability Testing System (CATS) testing window is set for April 21 through May 2.

Hall said the district’s number one testing goal is to not have any students score a novice.

Under the state’s assessment system, student performance is categorized with four levels: novice, apprentice, proficient and distinguished, with distinguished being the highest level. Schools are expected to meet unique, overall goals every two years. The ultimate goal is for every school and district to reach proficiency or 100 on a 140-point scale by 2014.

The school system defines strategic planning as the process and discipline whereby an organization continually recreates itself toward an extraordinary purpose.

“It has been a good process for our school leaders to meet with community members and get outside eyes,” said Anna Craft, superintendent of the Letcher County Board of Education.

• waived the board policy revision addressing the March 1 deadline for notifying school councils of their staffing allocations for the 2008-2009 school year. The Kentucky Department of Education extended the deadline until May 1 for this year.

• approved the following use of school facilities: World Pro Wrestling, Inc. match at Fleming-Neon gymnasium on April 4; Southeast Kentucky Community and Technical College class at a LCCHS classroom on Monday and Wednesday evenings; and a birthday party for Stacey Quillen at the LCCHS cafeteria on April 12.

• approved the 2008-2009 school calendar. School will begin for teachers on Wednesday, August 13, 2008 and the first day of school for students will be Monday, August 18.

• authorized advertising for bids for the following items for the 2008-2009 school year in cooperation with and through the Kentucky Valley Educational Cooperative: custodial supplies, instructional supplies, paper, school food service supplies and any other item KVEC will approve to bid.

“That has really been a saver on a lot of items,” said Craft.

• approved submission of the Federal Safe Schools and Healthy Students grant application. If awarded to the school system, the grant would total $2.4 million.

• entered into a full maintenance agreement with D-C Elevator Co., Inc. to furnish complete maintenance on the elevators located at LCCHS for $200 a month.

• approved continuing a memorandum of agreement with the Kentucky Department of Education and Campbellsville University to establish an educational partnership focusing on increasing the number of highlyqualified special education teachers in Kentucky.

• approved a memorandum of agreement with Morehead State University and Southeast Kentucky Community and Technical College for implementation of the College Cadet Dual Credit program for the 2007-2008 school year at LCCHS.

• ratified approval for submission of the Partner School District Participation Commitment with the University of Kentucky and its partners in a project of the Appalachian Math and Science Partnership.

• approved the following payment of claims for services rendered for the construction of the new baseball field: Elliott Contracting, $169,533.

Roger Martin, finance officer said the board has about $611,000 left to pay on the construction of the baseball field.

• approved the February finance report, payment of bills and transfers, and payment of salaries for March 2008. Martin reported that there is $4,594,934.87 in the general ledger balance.

• approved employing White and Associates, PSC to audit the financial records of the general fund, chapter I, school activity funds, school lunchrooms, and any other funds required by statute for the 2007-2008 school year. The total amount for these services in $18,885.

In the personnel report, Allen Rittenhouse, a bus driver at Letcher Elementary School, presented his retirement.