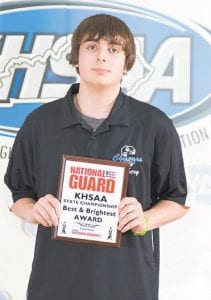 Letcher Central also finished fourth in the preliminary round, which was also captured by Trigg County.

Individually, Letcher Central freshman Cameron Adams finished in a six-way tie for eighth place out of 346 archers who competed in the event. Adams scored 293 points, just seven behind Trigg’s County’s Clay Stevens, who scored 300 to capture the championship.

For his effort, Adams won the Kentucky National Guard’s “Best & Brightest Award,” one of the top two of eight individual honors handed out during the meet. Stevens won Forcht Bank’s “All Around Excellence Award.”

The state tournament was held April 23 at the Kentucky Basketball Academy, beginning with four hour-long flights. The four teams with the highest overall scores across the opening flights advanced to the championship round later that afternoon.