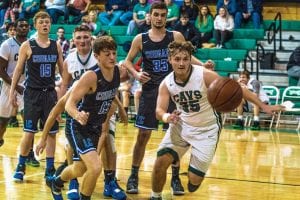 Tyler Boggs scored 21 points last Thursday and Greg Kincer added 14 to help the Cougars to the win over visiting Belfry. The Pirates held the lead at the end of the first quarter, 11 to 9, but LCC was able to tie the game up at halftime, 25 to 25.

After ending the third quarter with a one-point lead, the Cougars outscored the Pirates in the fourth quarter, 18 to 7, to put the game away.

Brett Coleman came off the bench to lead Belfry with 12 points, followed by 10 points from Avery Browning.

Jenkins was led in scoring by Ethan Cummings with 12 points, followed by 11 points apiece by Payton Rose and John Fleming. Chad Fleming had 10 points.