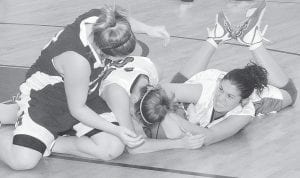 Well, it was another big game for the Letcher Central Cougars Feb. 10 as the Hazard Bulldogs came to town. The Bulldogs are the favorite to win the 14th Region and the Cougars were in for a fight as they usually are when these two teams tangle.

The Bulldogs are led by star guard Josh Whitaker (who is the son of former Whitesburg and Bell County coach Eddie Whitaker). In the middle they have Robert Warren and he can go outside and hit the trey as can all the Hazard starters. The Cougars have been on a roll but they needed a quality win against a team like Hazard to get some confidence before tournament time.

The game started with Whitaker scoring on a pull-up jumper and the Bulldogs jumped out to 6-1 lead early. Hazard answered a Cole Cornett 15-foot shot to go up 8-3. Josh Proffitt nailed his first trey of the night and it was 8- 6. Two Charlie Banks free throws tied the score at 8, but Hazard answered and was fouled to go up 11-8. Devon Blair scored from about 12 feet and Hazard came back with back-to-back treys to go up 19-10. The Bulldogs led 24-12 after one quarter.

Whitaker opened the second quarter with two quick scores and the Bulldogs’ lead grew to 30-14. But the Cougars rallied, as Charlie Banks hit 4 free throws to give him 10-10 from the stripe in the first half, and Proffitt hit a trey and was fouled on the shot. He made it to make the score 39-30.

Cornett scored before the break on a turnaround shot, but the play of the half was on the inbounds play. Hazard threw it in and Josh Proffitt went to the floor to knock it loose and hit a streaking Charlie Banks for the lay-up to make it 39-34. Hazard added a free throw to make it 40-34 at the half.

Hazard shot a blistering 71 percent in the first half on 15-21 shooting. Its guards were the key as Whitaker hit 5-8 for 11 points, and shooting guard Eric Back was absolutely on fire. He hit 6-7 field goals and 3-4 treys for 19 points.

The Cougars were led at the break by Banks with 14 and Proffitt with 7.

The Cougars hung tough after halftime and, with Banks driving to the basket, he pretty much stayed on the line. He hit 4 more in the third period to give him 14- 14 for the game. He would get his 20th point near the end of the third and Devon Blair would score before the horn to make the score 51- 47 after three.

Hazard pulled back out to a double digit lead in the fourth at 71-61, and just had a little more gas in the tank than the Cougars. The Bulldogs went on to win 76- 69. The Cougars hit three treys late in the fourth as Proffitt hit one and Blair hit two, but the Bulldogs hit their free throws and pulled out the win.

The Cougars got 22 points from Charlie Banks and 18 from Devon Blair. Josh Proffitt had 13 points and Cole Cornett had 9. Jordan Reynolds was held to 2 points and stayed in foul trouble much of the night. Freshman Logan Johnson had 5. The Cougars hit 21-24 free throws with Banks hitting 14-14.

The Bulldogs did something that almost never happens and that is out rebound the Cougars. They held the edge 30-21 on the boards.

The Cougars played their hearts out and they will learn from this. Hazard is a good team but the Cougars are right there with them.

On Friday night the Cougars would host a very dangerous team from Buckhorn. They cane in with a very respectable 15-8 record and the Cougars were in for battle from the opening tip.

The Wildcats hung around and got their confidence up and the Cougars could not pull away. The Cougars led 16-12 after one quarter and 35-33 at the half. They managed to pull out by 6 after three quarters 49-43, but the fourth quarter belonged to Buckhorn as the Wildcats rallied and outscored the Cougars 14-8 in the quarter to tie the score and send the game into overtime. The Wildcats pulled out a very hard fought victory over a stunned bunch of Cougars, 66-62.

I think the Cougars probably overlooked the Wildcats and didn’t play their usual game, but nevertheless it went down as a defeat and they had to regroup and get ready for Senior Night on February 17 at home against Belfry.

The Cougars fall to 17-7 on the season and Buckhorn improved to 16-8. The Cougars shot 23-53 against the Wildcats for 43 percent and hit 8-21 treys. They pulled down 34 rebounds and hit 8-12 from the free throw line. They were led in scoring by Josh Proffitt with 15 followed by Charlie Banks with 13, Cole Cornett with 11, Devon Blair with 10, Bryan Roark with 6, Logan Johnson with 5, and Eric Ison had 2.