The Letcher Central Cougar boys’ team with a record of 1-4 was on the road this past week in the Twin Lakes Holiday Tournament which was held at Clinton County. The Cougars will go into Christmas break on a high note as they made it to the championship game in the tournament before falling to eventual champion McCreary Central 62-55.

The Cougars opened the tournament with an impressive win against Monticello 73-46. After leading 38-30 at the half, they went on a huge run in the third period and then again in the fourth as they outscored Monticello 35-16 in the second half.

The Cougars had a balanced attack as hot-shooting Devin Blair led the way with 22. Josh Profitt had 14, Charlie Banks had 13 and Jordon Reynolds had 12 to lead the way for the Cougars.

They advanced from there to play a good Daviess County team, which came in with a record of 7-2. The Cougars trailed 16-14 after one, but stormed back to lead 34-28 at the break. The score was tied after three quarters and the Cougars were able to squeak it out in the fourth as they pulled out the victory 59-56 to move to the championship game. 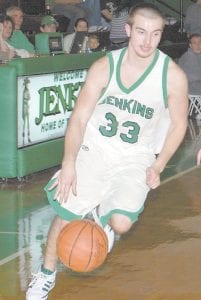 Jenkins Cavaliers senior Justin Hunsucker drove down court in a 69-54 loss to Cordia last week. The Cavs are 4-7 on the season. (Photo by Chris Anderson)

The Cougars got a big game from Charlie Banks as he led the way with 18 points followed by Devin Blair with 15 and Jordon Reynolds with 12. Josh Profitt came up with 8 points to pace the Cougars.

In the championship game the second quarter was the difference for the Cougars as they were held to 2 points in the quarter after leading 18-15 after one. McCreary Central, with a record of 7-1, led at the half 25-20. The Cougars trailed 47-37 after three and McCreary Central held off a Cougar rally to pull out the victory 62-55.

This was a good tournament for the Cougars. They are very young and this was a good challenge for them. They improve to 3-5 on the season and were led in scoring by Devin Blair with 19 points. Charlie Banks had 14 points and Josh Profitt was in double figures as well with 11. 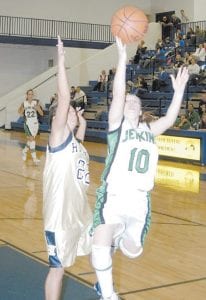 Jenkins Lady Cavaliers guard Emily Walker (above) led her team in scoring in a 52-42 loss to Hazard last week in the Lady Cougars Classic at Letcher County Central. The Lady Cavs stood at 1-8 on Dec. 21.

The Lady Cougars were led in scoring by Sharaye Kincer with 17 points followed by Brittany Sexton with 12. Begley ended up with 9.

They trailed by as much as 10 points in the first half, but gradually clawed their way back into the game. They trailed 37-33 after three quarters. They kicked it up a notch in the fourth and pulled out to a five-point lead after a three pointer by Brittany Sexton and a steal to put the Lady Cougars up 42-37.

This should go a long way in keeping the Lady Cougars’ confidence up as they played against a good Hazard team. They were led by Sexton with 18 points followed by Kincer with 12 and Bays came through with 10 to lead the Lady Cougars. Wynn and Begley had 4 each and Thomas had 2. Hazard was paced by 6’2″ L. Engle with 13.

The Lady Cougars improve to 2-5 and Hazard falls to 3-4. Happy holidays and merry Christmas.