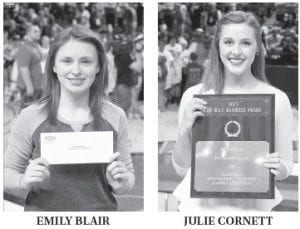 Senior Julie Cornett was named the winner of the Kentucky High School Athletic Association Joe Billie Mansfield Award after the championship game. The award is given for outstanding citizenship, basketball ability, and academic accomplishment.

The $1,000 scholarship Blair received is awarded for outstanding academic and leadership accomplishments. The scholarship will be paid to the college of her choice when she enters school in the fall of 2013.

Blair was selected from a pool of students nominated by their schools at the 2013 state tournament. She has been a member of the team for five years.

Cornett is the second Lady Cougar to win this award, presented by The Courier-Journal of Louisville, in the last eight years. Autumn Morris won the award in 2006. Her name will be on a plaque at the KHSAA office in Lexington and the award carries a $1,000 scholarship to the college she attends.

Cornett finished her basketball career at the state tournament scoring 16 points and gathering 18 rebounds in the Lady Cougars’ loss to Marshall County 56- 52. She completed her basketball career as the all-time leading rebounder with 900 rebounds, first in blocked shots with 113, and the third leading scorer with 1,301 points. She also finished sixth in deflections and seventh in steals, all these numbers as a post player.