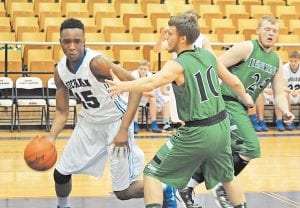 The boys’ basketball came to an end for the Jenkins Cavaliers and Letcher County Central Cougars this week, as both teams fell in the opening round of the 53rd District Tournament.

The Jenkins Lady Cavaliers also bowed out of post-season play Tuesday night when they fell to Knott County Central.

The Cougars were defeated Tuesday by region power Cordia, 65-45. The Jenkins boys fell to June Buchanan School on Monday night, 62-42.

The Lady Cougars were scheduled to play June Buchanan at 7:30 p.m. on Feb. 26. Should the Lady Cougars win that tilt, they will meet Knott Central at 7 p.m. on Saturday for the 53rd District title.

The Letcher County Central boys wrapped up their regular season last week by winning two of their final three games.

On Senior Night, Feb. 20, the host Cougars said goodbye to three seniors in fine fashion with an impressive 55-44 victory over Pike Central.

The visiting Buckhorn Wildcats rallied from six points down in the final quarter to defeat the Cougars 70-66.

With the outside shots dropping, Buckhorn took the lead in the final minutes and held off the Cougars down the stretch.