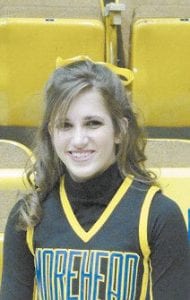 A former Letcher County Central High School cheerleader can be seen fulfilling one of her childhood dreams Sunday on ESPN2.

Sarah Jayne Ramsey, who graduated from LCCHS last year, is a member of the Morehead State University special competition team which won its 19th national championship earlier this year.

The team, made up of nine men and seven women, took first place at the Universal Cheerleaders Association cheerleading competition in Orlando, Florida on Jan. 17. This is its eighth win in a row.

Ramsey, the daughter of Johnny and Suzanne Ramsey of Goose Creek, is the only cheerleader on the squad from eastern Kentucky.

Ramsey said she watched many college cheerleading competitions when she was younger and hoped to one day participate in such an event.

Ramsey can be seen tumbling, cheering and being held high in mounts during the competition which airs at 1:30 p.m. February 22 on ESPN 2.

“It has been a lot of really hard work never getting to come home, only having five days off for Christmas and having two practices a day during our Christmas break,” said Ramsey. “But when you walk out on the floor with the nation’s best cheerleaders, it’s all worth it.”