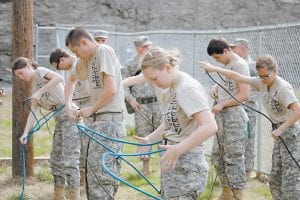 Teams from the Letcher County Central JROTC competed against JROTC groups from 12 other schools on March 25. (Photos by Damaris Sexton)

We brought home four trophies. The trophies were One Rope Bridge, Litter Carry, and Cadet Challenge, which consists of one-minute push-ups and sit-ups and one mile run. We placed third overall.

We had one cadet place receive top Female Physical Fitness award from the Cadet Challenge event. The cadet was Hannah Caudill.

The teams perform with a lot of energy and motivation, which everyone there recognized. They have all worked hard at this competition. 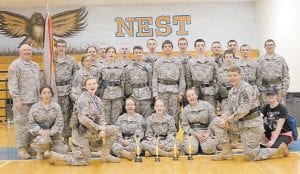