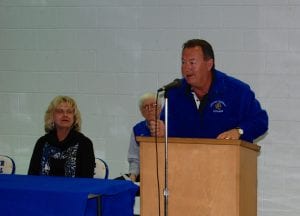 Mike Holcomb, who coached Breathitt County High School for the past 30 years, has been hired as the new head football coach of Letcher County Central High School.

The new hire was announced during a press conference held in the LCCHS foyer Wednesday afternoon.

“Thanks for people having faith in me to turn the keys over to this program,” said Holcomb. “There’s no magic formula to winning…It’s made by hard work, dedication and pride.”

Holcomb said the football team may not win every game, but it won’t be because of a lack of desire or preparation.

The coaching position became open after Paul Rains resigned Jan. 28 after coaching the Cougars one year.