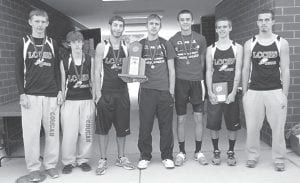 The Letcher County Central High School boys’ and girls’ cross-country teams posed for photos after finishing first and second in the region, respectively.

Letcher County Central High School’s boys’ crosscountry team won the Class 2A Region 7 championship in a meet held at Harlan County High School over the weekend, while the Cougars girls’ team took second place in their regional meet held at the same location.

Letcher Central secured the boys’ championship when six long-distance specialists finished among the Top 8 of 51 runners in the 5k race, led by junior Chase Cates, whose finishing time of 17:33.56 was bested only by Powell County’s Mark Ventura (17:21.10), also a junior. 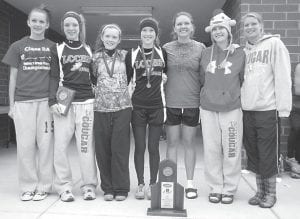 The LCC girls’ team was bested in the regional meet, also a 5k run, by Harlan County Central, whose senior Kassie Rouse had the top individual time of 22:43.91, besting LCC freshman Ally Damron’s 22:56.22. Junior Keisha Balthis completed the race in 23:13.62 to finish third among the 43 runners.

Both the LCC boys’ and girls’ teams, coached by Sallie Hubbard and Faye Collier, will advance to the KHSAA Cross-Country State Meet at Lexington Horse Park on November 10.