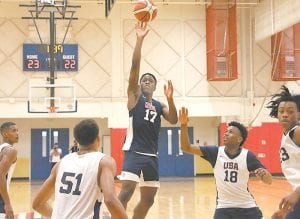 Keep working hard and good things will start to happen.

That’s the message being received by the Letcher Central Cougars after their second straight convincing victory — this one a 49 to 35 come-from-behind win over district rival Perry County Central on the road last Friday night — in their bid to end the 2018 football season with a winning record and a berth in the post-season playoffs.

Hunter Campbell rushed for 136 and four touchdowns while teammate Jonathan Sergent added two touchdowns while racking up 78 yards on the ground to lead the Cougars (2-4) to their second straight win, this one in a Class 5A District 8 tilt on Perry Central’s home field. The Commodores (4- 1) entered the game undefeated.

Letcher Central will now face three more district foes in the next three games, beginning this Friday night when they host the Harlan County. The Black Bears (1-4) are coming off their first win of the season; a 22 to 14 win over visiting district foe North Laurel in overtime. The Cougars will host North Laurel on October 5, before going on the road to play their final district game against Whitley County (1-4), which visits North Laurel this Friday. The Cougars finish their regular season on October 26, when they visit Class 3A Floyd Central (4-2).

Against Perry County Central, the Cougars were able to overcome an early deficit despite being outgained on the ground, 311 yards to 219 yards, and in the air, 79 yards to 52 yards. Jayden Neace scored all four Commodore touchdowns while rushing for 277 yards on 19 attempts.

Letcher Central made its only pass completion for positive yardage a meaningful one when quarterback Nick Sergent connected with Kalin Branham for a 52-yard touchdown. Kicker Zack Dollarhyde was good on five of his six extra-point kicks to help the Cougars’ winning cause.

Also contributing to the Cougars’ win was Jordan Adams, who recovered a defensive fumble, and Cody Austin, Hunter Brashear, Jepatha Griffith, and Zach Hensley, each of whom recorded one sack of the Perry Central quarterback.