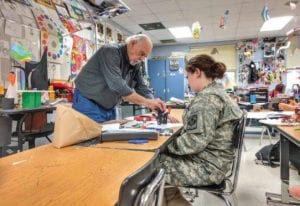 Doug Adams celebrated his 85th birthday on November 3, and student Allison Caudill work on a project in Adams’s Letcher Central High School classroom. He is employed at the high school as a full-time teacher. (Photo by Jennifer Honeycutt)

That makes him among the oldest — and possibly the oldest — classroom teacher working full-time at a Kentucky public school.

“I don’t know of anybody else that’s a full-time teacher that’s as old as Doug,” said Letcher Central Assistant Principal Scottie Billiter, adding that he knows of no age limitations for a teacher.

“We’re blessed to have Doug,” said Billiter. “He performs as well as any teacher we have if not better. He’s an outstanding teacher.”

Billiter’s daughter Ariana took Adams’s class last year. She said he taught her and her classmates how to make self sculptures from their “selfies” photographs.

While Adams said that teaching high school is “a whole different ballgame” than when he went to high school, he doesn’t get the feeling that there is a gen- eration gap between him and his students, despite a 70-year age difference.

“I don’t have any proof that any of them feel that way because they know I’m there to help them,” said Adams. “ I try to be as inventive as I can.”

“About everybody who takes a class in art, once you give them some challenges, will come around to enjoy what they’re doing.”

Both Adams and Ariana said they think it helps that Adams is a working artist. He focuses on water colors and using welding equipment on sculpture.

“I present my artwork to them, the same as they present their artwork to me. We discuss what they can do to improve theirs, sometimes they give me suggestions on mine,” Adams said.

Adams said he tries to encourage students by showing them that the information “they gain in my class will help them on ACTs or whatever exams they have to take” for college. His former students do well in art schools and university programs, he said.

Adams taught art at high schools in other states after he retired from teaching at Morehead State University, and then in 2005 began teaching high school in Letcher County where he grew up.

To want to stay in the classroom into your 80s Adams said, you have to love teaching and not just view the job as managing students or get ruffled by misbehaving students.

There are other classroom teachers in their 70s working in Kentucky public schools. For example, Estill County Superintendent Jeff Saylor said he employs a 78-year-old teacher who is in her 60th and final year.

Fayette Superintendent Manny Caulk said there are 14 employees 80 and older in his district, though not full-time teachers.

Out of the 14, three are food service assistants, one is an instructional paraeducator, and one is a school account specialist. The district also has nine substitute employees, including two who are 88 and two who are 86.

As for Adams, he said, “I’m not teaching to set a record or anything. I’ll probably work another year or so, good Lord willing of course.”

No member of the Kentucky Association of School Superintendents told the Herald-Leader that they were employing a full-time teacher who was any older than Adams.