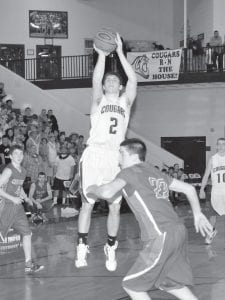 Letcher Central senior Logan Johnson fired a jumpshot in his final home game last week against Pike Central. Johnson scored eight points in the 64-44 win over the Hawks. The Cougars will face Cordia in the 53rd District Tournament on Wednesday at Jenkins. (Photo by Chris Anderson)

The Lady Cougars, despite a narrow 64-62 loss at Shelby Valley in their season finale on Feb. 13 that snapped a five-game winning streak, retained their 25th ranking in this week’s Dave Cantrall’s state girls’ basketball poll in the Lexington Herald-Leader.

The 20-5 top-seeded Lady Cougars met fourth-seeded Cordia in last night’s opening round of the 53rd District tournament at Jenkins High School. The Lady Cougars and the Lady Patriots are expected to meet for the third time this season in the district championship game on Friday night.

The opening rounds of the girls’ 14th Region tournament, hosted by Breathitt County High School, are scheduled for Feb. 27 and 28. The championship game is scheduled for March. 3. For most of this past season, many area fans felt the state’s fourthranked Perry County Central Lady Commodores should return to the Sweet Sixteen in Bowling Green for the second consecutive year. The visiting Lady Cougars changed a lot of minds after a narrow loss at PCCHS on Jan. 24. LCCHS led the Lady Commodores for most of that game — only faltering down the stretch because of foul trouble.

The girls’ Sweet Sixteen opening rounds are scheduled for March 7 and 8.

As they did last year, the Letcher County Central Cougars closed the final two months of their regular season with a rush — winning four of their last six with only an overtime loss at highly regarded Hazard and a narrow loss to 10thranked Oldham County in Jackson to mar their stretch run.

The second-seeded Cougars are18-10 heading into tonight’s opening round of the boys’ 53rd District tournament against thirdseeded Jenkins on the Cavaliers’ home court. The Cougars and top-seeded Knott County Central are expected to meet in the district championship game on Saturday night.

The boys’ 14th Regional tournament will be hosted by Knott County Central and will tip off with opening round games next week, Feb. 29 and March 1. The boys’ regional finals are scheduled for March 6.

Despite their 23-4 record and high ( seventh) state ranking, the Perry County Central Commodores will be hard pressed to win a second consecutive14th Regional title. Both 54th District rivals, Hazard and Buckhorn, if their shots are falling, are capable of upsetting the Commodores in the 54th District.

Breathitt County, the strength of the 55th District, and LCCHS appear to have solid shots at upsetting the Commodores in the regional tournament because both are excellent defensive teams and both have the size inside to match up with the Commodores.

After struggling just the night before to make shots, the host Cougars blistered the nets against visiting Pike County Central on Feb. 16 for the easy win in their final game of the regular season.

The Cougars, with three players in double figures, hit 14-of-23 field goal attempts (61 percent) in the first half with senior center Kori Stewart scoring 14 of his gamehigh 17 points. Stewart scored 11 in the first quarter as LCCHS jumped out to an 18-11 lead.

Despite some sloppy play at times in the second half, LCCHS still shot 46 percent on 11-of-24 field goal attempts to finish with 53 percent average for the game.

Whitaker’s third trey extended the Cougars’ margin to 51- 20 with 1:20 left in the third quarter. Whitaker finished with 11 points. PCCHS then ran off 10 straight points and closed to within 51- 30 entering the final quarter, but could get no closer.

The Cougars out-rebounded the Hawks 29-26 and forced them into 22 turnovers while making just 13 themselves. LCCHS limited the Hawks to 33 percent field goal shooting on 18-of-54 attempts.

In a matchup on Feb. 15 between two of the top-five regionally ranked teams in the final week of the regular season, the hosts, the fourth-ranked Cougars, held off the fifth-ranked Wildcats to raise their record to 17-12.

There were numerous lead changes throughout the game. LCCHS led 7-6 after the opening quarter and 17-14 at the half. Buckhorn closed to within 28-27 at the end of the third quarter and also led a couple of times early in the final quarter before the Cougars pulled away down the stretch.