The Letcher Central Cougars’ remarkable run in the playoffs met a brick wall last Friday night as they traveled to Williamsburg to take on the Colonels of Whitley County. The Cougars and the Colonels had met earlier in the season in a district game at Ermine. The Cougars played well in that game before falling 22- 14. A couple of turnovers that the Colonels converted really hurt the Cougars.

The Colonels are led by their talented running backs. Senior Jason Powers has rushed for over 1,500 yards and 24 touchdowns while Senior Cody Jones has rushed for well over 1,000 yards and 23 touchdowns. The field general is quarterback Jamie Lebanon and he is a junior. He has thrown for over 750 yards and 6 touchdowns but, like I said, they are a team that likes to stay on the ground. They came in with an 11-1 record with their only loss coming to powerhouse Bell County. 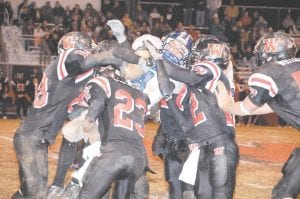 ALL WRAPPED UP — Letcher County Central senior wide receiver McKenzie Smith was stopped by six Whitley County defenders on this run. Tempers began to flair after this play and came to a head a short time later when a melee broke out and players from both sidelines came onto the field. No players were ejected and the teams were allowed to finish the 1:30 that remained in the 4th quarter. (Photo by Chris Anderson)

The Cougars, 10-2 with losses to Whitley and Perry Central, have been led by senior quarterback Charlie Banks. He has put up huge numbers the past two seasons. He passed for 20 touchdowns last year and he has passed for 20 this season. He rushed for 19 touchdowns last season and he has rushed for almost 900 yards and another 19 touchdowns this season. He is joined in the backfield by several running backs who have contributed this year including second leading rusher Greg Collins Jr. with almost 700 yards. Travis Stephens, Dustin Brown, and Michael Frazier have also seen a lot of action in the backfield. Dustin Brown and McKenzie Smith have been the leading receivers for the Cougars but Travis Stephens and Greg Collins have also contributed as have several others on the ground and through the air.

The game on Friday night got off on the wrong track for the Cougars as they were bitten again by the turnover bug early in the game. They turned the ball over twice early on and the Colonels took advantage much as they did in the first game. A fumble and an interception result in a 17-0 lead for the Colonels after only one quarter. The Colonels kicked a field goal to round out the scoring in the period.

In the second quarter the Cougars moved deep into Colonel territory only to turn it over with another interception in the end zone. The score stood at 17-0 at the half.

The Cougars opened the second half on offense and Charlie Banks went over the 100-yard mark rushing the ball with a 19- yard burst, but the Cougars had to punt the ball. The Colonels took it at the 27 and in two plays they were at the Cougar 44. On the next play it was 44 yards and a touchdown for Jason Powers as the running game was starting to hit overdrive for the Colonels. It was 23-0 and the Cougars were in trouble.

After returning the ball to the 35, the Cougars started another drive with the big play coming on a 42-yard run up the middle by big man Caleb Frazier that took everyone by surprise. With the ball at the Colonel 18, Banks quickly hit Stephens on a shuffle pass for 7 yards and then, after Banks took it to the 10 on a keeper, Dustin Brown took it to the 5 on the next play. Then the bug hit again as the Cougars fumbled on the next play and the Colonels took over.

The Colonels struck quickly as they marched to the Cougar three in 6 plays and Powers took it home from there for his third touchdown and a 31-0 Colonel lead early in the fourth quarter. Playing for pride, the Cougars fell behind 38-0 before scoring late in game. Banks connected on a 60-yard pass to freshman Logan Johnson and he took it in from there. Caleb Frazier tacked on the two-point conversion to make it 38-8 and that would do it.

The Cougars finished the season at 10-3 and for the second straight year the Cougars had reached the final eight in the state. This is a remarkable accomplishment for a school that is only four years old. They lost to a very good Whitley County team that can cause problems for Fort Thomas Highlands (who, by the way, is their next opponent).

The Cougars should be very proud of what they have done these last two years and they have done it with a great bunch of kids and a great group of coaches. The Cougars will miss a big group of seniors that played their last game Friday night. They will say good-bye to Kevin Wurschmidt, Craig Collier, Andy Branham, Jake Hall, Michael Frazier (a first-year transfer from Virginia who figured into some big plays for the Cougars this season), Chase Knight, Aaron Finn, Richard Shepherd, Daniel Collins, Willy Joe Smith, Joey Kincer, Blake Conn, Nathan Adams and finally big man Caleb Frazier and last of all Charlie Banks.