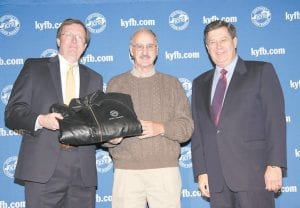 Letcher County Farm Bureau won top honors for its region of the state in the 2011 Safety Challenge Awards competition during Kentucky Farm Bureau’s annual meeting in Louisville. The award was given to Letcher County for the community education it offered during quarterly roundtable discussions on WXKQ Radio and local television’s channel 98. The sessions focused on automobile safety and consumer health.