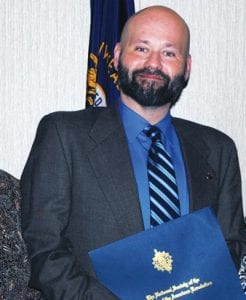 The purpose of the award is to recognize a notable, full-time teacher of history in public, private and parochial schools. Candidates must meet several criteria and submit a dossier to be reviewed by a committee of judges from across the state.

At the 2019 Kentucky State DAR Banquet, following introductions by State Historian Sally Whittington, Leslie Miller, the KDSAR State Regent, presented Brock with his award and a monetary gift. His application has been submitted to the National DAR organization for judging and, if he is selected as the national winner, he would be presented that award at the Continental Congress in June in Washington, D.C.

In his acceptance speech, he thanked his mother, Bonnie Hatton of Pert Creek, and many teachers from the Letcher County School System including Tanis Pennington, Sandy Earl, and his greatest inspiration to become a teacher, former WHS and LCCHS teacher, Kim Sergent. Brock went on to say of Letcher County that the “investment in elementary, middle, high school, and higher education in that community played almost as great a role in my success today as the family and cultural values that I hold so dear.”

Brock teaches a variety of social studies classes at Rockcastle County High School, including Advanced Placement Government and Politics and Advanced Placement World History, World History, and Introduction to Special Education through EKU’s Dual Credit Program. He is also the coach of the RCHS Academic Team, commissioner of the Rockcastle County Elementary Academic League, and is the sponsor of the RCHS Drama Club and Educators Rising Club. More information about Brock and the award can be found at his website, MrBrock.net.