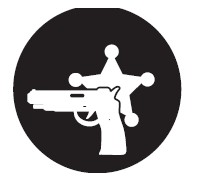 Saturday, May 9 • At 8:45 p.m., the Letcher County Sheriff ’s Office is informed about the death of a man inside a house at Big Blue Blvd., Isom. EMS workers confirm the death and Letcher County Coroner Marty Baker is notified. • At 11:54 p.m., sheriff ’s deputies are en route to the ARH Psychiatric Center in Hazard with a Jackhorn man who has been saying he feels like hurting himself.

Friday, May 8 • At 5:46 p.m., the Letcher County Sheriff ’s Office is alerted about the male operator of a teal-colored Chevy Blazer who stole a pair of needle-nose pliers and an energy drink from the Mayking Dollar Store and is headed toward Whitesburg. The sheriff’s offi ce contacts the Whitesburg Police Department.

• At 5:46 p.m., a sheriff ’s deputy reports that he is leaving a home at Sergent Loop, Sergent, after accompanying social workers on a visit there.

Thursday, May 7 • At 10:39 a.m., a male resident of Alaska Avenue, Whitesburg, telephones the sheriff ’s office to complain that someone has hacked his Facebook account and labeled him a pedophile on the Internet. • At 10:45 p.m., a Premium woman tells sheriff ’s

deputies she was intended target of a continuing scam where the caller identifies himself as an agent with the Internal Revenue Service, says the woman is $5,000 in debt to the IRS and must immediately pay the caller $1,000 or have her assets frozen, her vehicle taken, and ordered to appear in federal court. The woman says the purported IRS agent knows her Social Security number and other identifiers. • At 10:48 a.m., an Isom woman speaks with a deputy about her husband’s mental abuse of her. • At 1:40 p.m., Kentucky State Police Post 13 in Hazard notifies the sheriff ’s office about a domestic disturbance with shots fired at Cane Hollow Road, Camp Branch. Police arrive to find out all is okay, as a resident

had fired shots trying to get two dogs separated. • At 7:12 p.m., a sheriff ’s deputy reports he is leaving a home at Blossom Drive, Millstone, after going there at the request of Kentucky State Police Post 13 in Hazard. • At 9:12 p.m., a Letcher County sheriff ’s deputy arrives at a home at Dog Rock Road, Eolia, in reference to a matter being handled by social services workers from Wise County, Virginia.

Wednesday, May 6 • At 11:03 a.m., the sheriff ’s office receives a telephone call from a property owner at Ingram’s Creek, Linefork, who says someone has removed two large white oak trees from her land without her permission after cutting a road to the trees with a bulldozer. The caller identifies three men who have been logging on properties adjacent to hers, but could not say which of three she believes took her trees and damaged her land. She is referred to Letcher County Attorney Jamie Hatton. • At 3:24 p.m., a Linefork woman calls the sheriff ’s department and tells a dispatcher she is afraid to return to her home at Campbell Town Road. The woman says her son and his girlfriend live with her, and that both are on drugs. She says that when she found a plastic bag with pills inside, the son told her the pills belonged to the girlfriend, after which the girlfriend

grabbed the woman by the left arm, causing a bruise. The woman says her son then drew his arm back to hit her, but did not follow through with the threat. However, she says the son did hit her on the arm two weeks ago when she asked his girlfriend to leave the home. • At 3:47 p.m., a sheriff ’s deputy visits Jent Mountain, Carcassonne, in an attempt to find a man in reference to an indictment. • At 6:09 p.m., a sheriff ’s deputy speaks with a man who has been seen at McDonald’s Restaurant in Whitesburg trying to sell items out of a suitcase. The man says he is trying to earn enough money to get back home to Boyd County.

Tuesday, May 5 • At 6:53 p.m., a sheriff ’s deputy says he is leaving a Dollar Store outlet, location not listed, after reviewing video surveillance tape.

Monday, May 4 • At 11:37 p.m., a caller from Virginia tells the sheriff ’s office his ex-wife has the former couple’s children, ages one and three, living with a sex offender in the Eolia area.