By MARK STORY The Lexington Herald-Leader 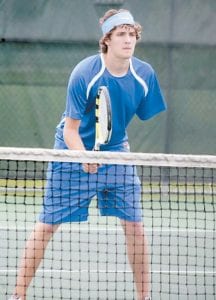 As a high school sophomore, Jacob Raleigh made a vow to himself.

After Raleigh was part of a Letcher County Central doubles team that lost in the first round of the 2009 Kentucky state tennis championships, he promised he’d get back to the state tournament before his high school days were over.

Back then, Jacob would never have dreamed what a challenge that would be. Nor the magnitude of the accomplishment once he pulled it off.

The Jacob Raleigh who played in the ‘09 state tennis tourney was a hard-serving left-hander whose game was built on power. Back then, it would have seemed unnecessary to note he had two arms.

On May 26, under gray skies at the Sayre Athletic Complex, Jacob kept his word to himself and returned to the state tournament in doubles in his senior year.

The Jacob Raleigh who played in the 2011 state tennis tourney played right-handed and relied on touch and guile to try to win points. He had to play with his “off hand” because, after a struggle with a rare form of cancer, Jacob no longer has a left arm.

“To have to go through cancer, first of all. Then you have your dominant arm taken away,” said Tyler Smith, Jacob’s doubles partner. “And still to be able to come back and play like he has, it’s crazy. I don’t know if I could have done that.”

There are almost no sports stories where the use of the word “courage” is appropriate.

Jacob Raleigh’s is one where it is.

The way Jacob figures it now, tennis saved his life.

Jacob says there had always been a little bump on his left wrist. He’d never thought much about it. Then, one day in late March of 2010, he was practicing tennis, and his left wrist started throbbing.

Eventually, Rick and Tracy Raleigh took their teenage son to a doctor in Bristol, Va. A tumor was removed from Jacob’s wrist, and samples were sent to be evaluated by experts around the country.

At the Mayo Clinic in Minnesota, they came back with one of the more dreadful diagnoses possible: Cancer. Jacob was told he had Epithelioid Sarcoma, a rare soft-tissue cancer that usually strikes young adults.

It can be fatal.

Eventually, Jacob went to the Mayo Clinic. There, he and his parents were given three choices: 1. amputation of his left arm; 2. a severe regimen of radiation that would leave his left arm in place but render it useless; 3. a surgery that would remove tendons from Jacob’s legs and replace the cancerous areas in his arm.

Option No. 3 was the clear choice.

For a time after that surgery, it seemed all would be well.

Then the wrist began hurting again.

Jacob went back to the doctor in Bristol, Va.

“He said it looked like I had a reoccurrence,” Jacob said.

In early October, Jacob went to the hospital prepared to have his left arm amputated.

Says Rick Raleigh: “When we got there, I told the doctors, ‘Once we do this, it’s gone. Isn’t there anything we can do (short of cutting off the arm)?’ “

Once more, biopsies were taken on Jacob’s left-wrist area. They were sent out to the experts.

On the final section of the final biopsy, the Mayo Clinic found cancer.

That was the final verdict.

Buttoning with one hand

The transition to life with one arm was filled with trials large and small.

One of the first challenges Jacob faced was putting on his pants. “Instead of zippers, a lot of my pants had buttons,” he said. “I had to learn how to really suck in my stomach and pop (the buttons in the holes) with one hand.”

Other issues were far more difficult. In the weeks after his surgery, Jacob experienced “phantom pain” so sharp, “it would make me double over,” he said. “It was brutal.”

According to the Mayo Clinic’s Web site, phantom pain feels as though it is coming from a body part that is no longer there. It was once believed to be psychological. Experts now say it is a real phenomenon that originates in the spinal cord and brain.

Before the amputation, Jacob had to contort his 6-foot-3 frame in an awkward position to put his left arm in a position to be properly read inside MRI machines.

The result of that has been a series of panic attacks anytime he finds himself in a confined area.

“I go through tunnels now, I have to close my eyes,” Jacob says.

When he came back to school as a senior after the amputation, Jacob had to relearn how to write using his right hand. Unused to the activity, the hand would cramp painfully.

Without the arm, Jacob fretted that people would look at him differently in high school.

“I think some people do,” he says, “but the people who know me don’t. I couldn’t have gotten through this without my friends.”

In January, some three months after the amputation, Jacob and his dad, a former tennis player at the school now known as the University of the Cumberlands and the Letcher Central tennis coach, did something they used to do all the time before the surgery.

They went onto a tennis court and hit.

Jacob had the racket in what used to be his “off hand.” At first, it felt weird. By the time that first hitting session ended, Jacob started to feel more comfortable.

A brash thought began running through his mind: He was going to try to play his senior year of high school tennis.

One- armed. Right- handed. Only months after life-altering surgery.

Back to the state

Before Jacob and his partner, Smith, took the court against Henderson County’s Stephan Williams and Morgan Johnson last week, the Henderson duo had no idea they were facing a one-armed foe.

“When we got out there, I was curious to see how he was going to pick up balls,” Williams said. “And I really wondered how he would serve. I thought he would put it on his racket and then pop it up. But he had the ball and the racket in his hand and tossed. I thought it was really cool.”

In its first match of this season, Letcher Central faced Hazard. Before the surgery, Jacob was his school’s No. 1 player. Now, he was playing No. 3 singles.

“I was more nervous than I had ever been before a tennis match,” he said. “But the player I was playing was a first-year guy, and I figured that, as a right-handed player, I was first-year, too. That helped me relax.”

Jacob won that day and won six of eight singles matches he played in this rain-shortened season. In the regional tournament, he and Smith won two doubles matches to reach the semifinals.

That qualified them for a berth in the state tournament.

So some seven months after he lost his left arm, after he had to relearn his favorite sport righthanded, Jacob was in Lexington last Thursday fulfilling the vow he’d made to himself as a sophomore.

“I’m just excited,” he said before the state tourney match. “It means everything to me to be back here.”

Alas, there was no Hollywood ending. Henderson County’s Williams and Johnson controlled the match and won in straight sets.

During play, Williams said he found himself looking at Jacob and thinking “that must be a pretty inspirational story.”

Courageous would be the way to describe it.

Mark Story is a sports columnist with the Lexington Herald- Leader.