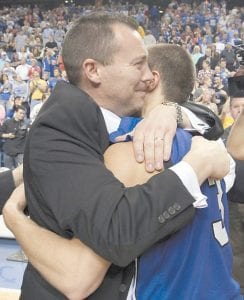 The Shelby Valley Wildcats, from a small Class A high school in nearby southern Pike County with an enrollment of only about 575, brought tremendous pride to mountain residents on Saturday night when they defeated Louisville Ballard, 73-61, to win the KHSAA Boys’ Sweet 16 Basketball Tournament at Rupp Arena in Lexington by a score of 73-61.

Booher dedicated the win to the late Chad Witt, who was Booher’s best friend when he was among 27 people killed when a school bus carrying a youth group returning from a visit to King’s Island amusement park near Cincinnati was hit by a drunk driver driving on the wrong side of Interstate 71 at Carrollton, Ky., on May 14, 1988. Booher, then an eighth-grade student at Radcliff e Middle School, was one of 40 crash survivors and was sitting next to Witt at the time of the crash. (AP Photo/ James Crisp)