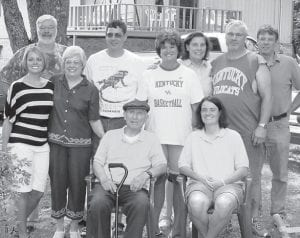 I hope all had a safe and happy Labor Day weekend.

Don, K.P. and Lana Pridemore and I all went to Ohio to visit family and take in the big flea market at Wheelersburg. Tommy Harris Smith, Lillie Moss Hale, Mary Jo Blair, Kenneth and Anna Lou Blair, were also there to visit and look around.

We all missed Lee and Wilma Pridemore, who couldn’t make it, due to Lee having problems from his recent surgery.

We all had dinner afterward at the church where Roy Kenon and Billie Jean Smith, and Bill and Elva Marshall attend. Lenville and Kathy Pridemore were also there, and some of their family as well as Roy and Billie’s and Bill and Elva’s families.

We also had some of their church friends helping with dinner and visiting with us.

Belated birthday wishes to Abby Little of Sycamore Loop, who had a birthday in August. She was riding her bike around the ‘Loop,’ along with her mother, sisters and brother, when Coreen and I talked with them recently.

We’re glad that Wanda Caudill has gotten well enough to be back home. She has a granddaughter staying with her. Geraldine Ison and Mary Carolyn Blair went to visit her.

Vince and Juanita Mc- Carey were up from Somerset for a week recently. They worked around the house and enjoyed a visit from Gillis and Cornie Adams. Their daughter, Paula, brought them down and picked them up. It was the first time in many years that Gillis had been to his grandparents, J.T. and Margarette Smith’s, old homeplace.

The Jeff and Hattie Ison families got together at Carlisle, for the family reunion. I think it was this past weekend.

Gerald Amburgey of Eolia is doing better after his recent heart surgery. He had a setback at one point, and came to stay awhile with his mother, Pat Amburgey, but is doing better now.

Curtis and Chelsie Adams have moved into their newly built house on Blair Branch. Soon they will also be new parents.

Sept. 18, at 2 p.m., there will be a dedication ceremony at the I.D. Back Memorial Bridge. Everyone is welcome to attend, and refreshments will be served afterward at the Blackey Senior Citizens building.

We all still miss I.D., and I know his family does too. He was blessed with a love for people, especially young people and children. I.D. touched many lives with his loving ways and tender sermons during all the funerals he was called to preach. He was a very special called man of God, and all who knew him would agree.

Recent visitors at Ellis and Ila Adams’s home were Ila’s brother Arnold Whitaker and his wife Norma and Ila’s sisters, Eolia and Merle Caudill, and Kathy and Dale Bridges. Ila was pleased to get a ‘mess’ of fish from Kathy and Dale.

Don, Coreen and I all drove over to Russell County, Va., to watch Noah Campbell compete in a goat show. It was the county fair there, held near Castlewood, Va., and the Letcher County 4-H leader, Jason Brashear, took five young goat handlers with him to show and compete. Those who went were Trevor Adams, Addison and Dorothy Whitaker, Terry ‘Bubba’ Wolfe, and Noah Campbell. It think they all came home with ribbons. Noah was the only one in his division, so he got a blue ribbon and $15 in prize money.

We’re very proud of these young participants, and of Jason for taking an interest and making the effort to help the youth in Letcher County. He also competed in the show with his nice, big Boer goats.

I took Coreen Pridemore and Geraldine Ison to the recent memorial for deceased members of the Daughters of the American Revolution. We were invited to come in memory of our cousin, Patricia Francis Thrash, who passed away in April. Although she lived in Houston, Tex., she stayed involved with the Letcher County chapter.

The meeting was held at the Graham Memorial Presbyterian Church, and we enjoyed being with them and thank them for their hospitality, and the refreshments.

They had also lost another wonderful member, Ruby June Caudill, and many fond remembrances were told concerning her and Pat.

A birthday party was held at the home of Shane and Amber Pridemore Williams for their little boy, Luke. Luke had many family and friends at his home on Black Bottom, helping him celebrate his second birthday.

Defeated Creek Church at Linefork, had three visitors from Sweden attending the Sunday services. The young men had wanted to come in sooner, but the volcanic eruption a few months ago had stopped airplane traffic at that time. I think they had learned of the Old Regular Baptist churches from the Internet.

We were saddened to learn that Marlene Bailey lost her life in a traffic accident. She was the wife of former Golden Oak Mine foreman Bill Bailey and her sisters, Cora Lee Adams and Dorothy Wright, are members of the Blair Branch Church. Our sympathy goes out to her entire family.

This weekend is meeting time at Blair Branch Church, and all are welcome to attend.

Jerry and Bonita Adams, Liberty and Noah Campbell, and Hunter Banks all recently spent a couple of nights camping out on top of Blair Branch, near Buzz and Carla Adams’s home.

A lot of the Adamses and Pridemores were there for a soup bean dinner, but left the mountain early. Dad, Mom and I, left before 9:30 that night. Ellis and Ila Adams drove around to visit their son Craig’s grave before coming to visit and eat with us. They also left the top of the mountain before dark.

Noah and Hunter really enjoyed playing and telling scary stories in their tent. They didn’t hear the ‘booger’ that came around the tent at 4 a.m. and woke up all of the adults. They don’t know what it was huffing and grunting, but it wasn’t scared of Jerry yelling at it.

It seems that fall came upon us overnight. The beautiful fall sky, the way the shadows fall now, and the cool nights, just seemed to change all at once. It’s a beautiful time of the year.