Letcher County also made news with state beauty queen in 1959 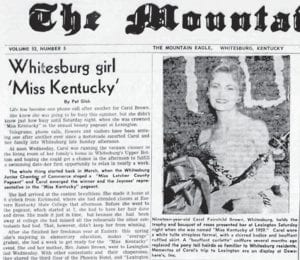 Letcher County is abuzz this week with the news that one of its own, Destin Kincer, has been selected to compete in the Miss USA pageant later this year after winning the title of Miss Kentucky USA Sunday night. There was similar excitement in the county in June 1959, when Carol Brown was crowned Miss Kentucky, which earned her the right to compete for the title of Miss America. The following story written by current Mountain Eagle publisher Pat Gish appeared in the June 18, 1959 edition.

Life has become one phone call after another for Carol Brown.

She knew she was going to he busy till summer, but she didn’t know just how busy until Saturday night, when she was crowned “Miss Kentucky” in the annual beauty pageant at Lexington.

Telegrams, phone calls, flowers and visitors have been arriving one after another ever since a motorcade escorted Carol and her family into Whitesburg late Sunday afternoon. At noon Wednesday, Carol was running the vacuum cleaner the living room of her family’s home in Whitesburg’s Upper Bottom and hoping she could get a chance in the afternoon to fulfill a swimming date — first opportunity to relax in nearly a week. 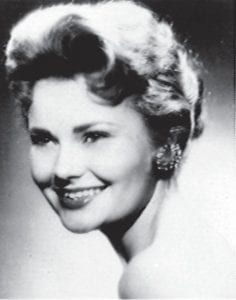 The whole thing started back In March, when the Whitesburg Junior Chamber of Commerce staged a “Miss Letcher County Pageant” and Carol emerged the winner and the Jaycees’ representative in the “Miss Kentucky” pageant.

She had arrived at the contest breathless. She made it home at 6 o’clock from Richmond, where she had attended classes at Eastern Kentucky State College that afternoon. Before she went to the pageant, which started at 7, she had to have her hair done and dress. She made it just in time, but because she had been away at college she had missed all the rehearsals the other contestants had had. That, however, didn’t keep her from winning.

After she finished her freshman year at Eastern this spring (she’s majoring in elementary education, makes “average” grades), she had a week to get ready for the “Miss Kentucky” event. She and her mother, Mrs. James Brown, went to Lexington last Wednesday. With other contestants and their chaperones, they shared the third floor of the Phoenix Hotel, and “Lexington was ours.” She took part in television and radio interviews, posed for photographers, and rehearsed for the pageant.

Then, at 12:30 a.m. Sunday, Miss Sandra Sue Smith of Harlan, last year’s “Miss Kentucky” placed the glittering crown on Carol’s blonde head. There were no tears of joy from Carol, because the contestants had been told to remember to maintain a regal bearing, and not to cry.

Carol didn’t get emotional until she saw the 100 or more cars gathered at the Letcher County line to escort her into Whitesburg Sunday afternoon. The parade was headed by Whitesburg’s red fire chief car, bearing a sign which said, “Welcome Home, Carol Brown — Whitesburg’s Own Miss Kentucky.”

Being a beauty queen isn’t new to Carol. Her first beauty contest — which she didn’t win — was as Whitesburg’s representative in the Big Sandy Bowl football game when she was a high school junior. She served as a homecoming attendant at Whitesburg High two years. She also represented Whitesburg in the “Queen of the Mountains” contest at Cumberland. Last summer she was named “Miss Whitesburg” at the Jaycees’ Fourth of July celebration. At Eastern, she was named Freshman Queen and Snowball Queen, was Eastern’s representative in the Blue Grass Bowl queen contest and was a homecoming attendant.

The “Miss Kentucky” title is her biggest so far, and she classes it as “different” from the others. As Miss Kentucky, she will serve as the state’s official hostess for the coming year. More than that, she will represent the commonwealth at the “Miss America” contest in Atlantic City, N. J., later this summer and may add another crown to her collection.

Carol already had made plans to hold a modeling school for young girls at her home this summer. She credits much of her own success to a course given here by Ginny Coldiron and Janice McClure, both professional models, in which she was enrolled when she was a high school sophomore. She doesn’t yet know when her own course will start.

Right now she’s pretty busy being Miss Kentucky. In addition to reading and answering letters and taking phone calls, she has spent five hours (Tuesday) with reporters and photographers from the Courier-Journal, which will feature her in a forthcoming Sunday magazine article. Next week she and her mother will return to Lexington for conferences with the Lexington Jaycees, sponsors of the Miss Kentucky pageant, on plans for Carol between now and the Miss America pageant. In addition, they will go to Frankfort, where Carol will pose for pictures for the Kentucky Department of Public Relations, the state’s promotion agency.

So far this week, Carol has been interviewed by two newspapers and three radio stations (WHAS in Louisville got her out of bed Monday).

She will have to spend come time this summer rehearsing for the talent portion of the Miss America contest. In the Miss Kentucky contest, her talent entry was a dramatic reading of “Patterns” by Amy Lowell. However, it Is too long for the Atlantic City pageant, so Carol will have to use another selection. She will spend at least two weeks at Pioneer Playhouse in Danville in training for the talent event. In addition, the Jaycees at Lexington want her to take some diction training to remove some of the flatness from her speech.

Carol also will have to choose a wardrobe for the Miss America contest. For this, she will have the benefit of advice from Miss Smith and her parents, who have been through the contest themselves.

In addition to the publicity and attention, Carol will receive some very material benefits as winner of the Miss Kentucky title. First of all. She will get a $500 scholarship from the Pepsi-Cola Bottling Company. Then there will be a $100 scholarship from the Miss America pageant, a $25 dress, a formal for the national contest, a week’s vacation at a state pack, some shoe gift certificates, some hose, a vanity mirror and picnic set, and of course the trip to Atlantic City.

Both her parents plan to attend the events in Atlantic City.

They were at the Lexington pageant. and were calling friends and relatives at 2:30 a.m. Sunday to tell them the good news.

Martin Dawahare, president of the Whitesburg Jaycees, also accompanied the Browns to Lexington and plans to go to Atlantic City.