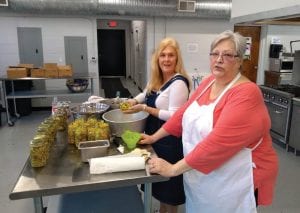 CHOWCHOW TIME – Regina Niece (left) and Carolyn Sturgill canned chowchow for an upcoming episode of the new PBS series Somewhere South, which stars Vivian Howard of A Chef’s Life. The canning was done at the CANE Kitchen in Whitesburg. (Photo by Sam Adams)

The city of Whitesburg and the nation of India might have more in common that you might think.

That’s the premise of one episode in a new PBS food documentary hosted by chef Vivian Howard. The chef, whose series “Chef’s Life” aired on PBS for five years, is now working on a second series called “Somewhere South,” and she was in Whitesburg on Monday looking for chowchow, a pickled mixture of garden leftovers made and canned across the South every fall, or earlier in the season by some.

“Every episode is about a dish every culture shares, and this in eastern Kentucky is part of our pickle episode,” Howard said.

The story started by following Brown in the South, a group of chefs of Indian descent who live and work in the southern United States. That led the video crew to Lexington and chef Samantha Fore, who is of Sri Lankan descent. Her pop-up business, Tuk Tuk, began by serving Sri Lankan street food on certain dates behind the bar at The Arcadium in Lexington, and now has special events around the country.

Fore, who had visited Whites- burg, recommended it to the producers of Howard’s show because of chowchow.

Howard explained that chowchow uses the spices turmeric and mustard seed, both common in traditional foods of India and Sri Lanka, an island off the southern coast of the Indian subcontinent. She says the spices arrived in North America as part of the British migration, after being brought to the United Kingdom by army officers who served in southern and southeastern Asia.

“Officers were in India, and loved the mango pickles, and they took the spices back with them,” Howard said. “They didn’t have access to mangos, so they used unripe peaches.”

After leaving Lexington at 4:30 a.m. Monday, the film TV crew spent the morning picking peppers and other late vegetables at Southdown Farms on Craft’s Colly, and arrived at the CANE Kitchen in Whitesburg about 9:30 a.m.

For the visit to Whitesburg, PBS enlisted the help of Carolyn Sturgill of Cowan and Regina Niece of Knott County to prepare and can chowchow on camera and talk about how the dish is made, and about its tradition here in the mountains.

She said some people at a “story circle” at Appalshop later said chowchow was always made with whatever was left in the garden at the end of the season, but Sturgill said it was just part of the regular gardening in her home.

Growing up in a household with a single mother who raised two acres of gardens with just the kids to help, Sturgill, 68, said they bought virtually nothing in the store, and chowchow was made during the course of the year as they prepared for winter.

“We never waited till the end of the season,” she said.

Everyone she knew, she said, had soup beans at least once a week, and chowchow was an integral part of the meal.

“Everything we had was either pickled, dried or salt-cured,” she said.

After filming was complete, CANE Kitchen had a community dinner. On the menu — soup beans, cornbread, crackling bread, neck bones and potatoes, and chowchow made ahead of time by kitchen manager Brandon Fleming.