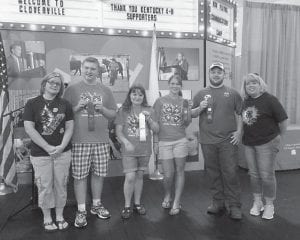 We’ve been having some much-needed hot weather in the Ohio Valley area! I only have one thing to say, it’s about time before the snow starts to fly.

I have so many mixed emotions. Just when I think I am ready to give up my home, ye,s I said home, not just a house, I walk out in the yard or gaze across the field. In my mind I try to imagine what living cooped up in an apartment would be like, four walls, and probably no windows except maybe a couple.

Then I think of it being more economical, as my car has 108,000 miles. I could sell my house, buy a new car, be able to travel a little before it is too late and I’m not able to go. I might even go where it is warm, where the climate fits my clothes, or lack of them, and join a nudist colony. I’m tired of doing laundry.

Now quit laughing or you won’t be able to read.

I spent a little time with my Nottingham grandchildren, Jessica, Katelyn, and boss man Kyle, who kept kissing me and telling his parents that he is Mamaw’s boy. Scott and Anna only lives about 30 minutes from me, yet this is the second or third time I have seen them since Christmas.

I’ve only seen my little sidekick Bennie Wiederhold a couple of times all summer.

Anna has one tomato plant that is supposed to be a cherry tomato. The plant itself looks like a small bush, and has tomatoes about the size of plum. She has given so many away to neighbors, etc., and had I known she had these, I would have been there a long time ago. That’s what you get without communication.

Somehow summer has almost disappeared and I haven’t accomplished any- thing except an occasional trip to Fairborn.

I missed a special event as a benefit was held for a lovely young woman who has cancer. It wasn’t a good day for me so I stayed home.

I’m looking forward to Blackey Days, which is still in the ‘iffy’ state, as in ‘if I will get to attend.’

The only thing that is a driving force that makes me really want to go is I would like to meet the person who I admire so much for the wonderful writing he shares on this thing called Facebook.

Richard has gone back to a life that I have so often dreamed about, to live in much more simple times. If he doesn’t put a gate up with a lock — what the heck am I saying, I can climb a fence!

I might show up and invade his privacy. The only thing is, I am afraid of bears, snakes, etc. Oh he is a lot bigger than me, and I can’t run as fast as I used to.

When Ricky Caudill writes about things you feel as if you are in the place, time, or era with him.

I have read oodles of books, famous authors, some not so famous, even delved into writing myself. But now I know what people mean when they told me that it is like a visual journey as they were reading my writing. I write from my heart whether something is funny, imagined, and especially true-to-life events.

I really don’t care for books that have words that I have to get a dictionary to understand.

Richard had the unpleasant pleasure of doing a little private tutoring as I heard about an explosion of liquid oxygen. I didn’t know what this meant, and when I saw him on Facebook, I asked him.

Oh once again I do envy educated people, well some, anyway. I have known some very intelligent, educated people who are as dumb as a box of rocks, including a couple of teachers that money was wasted on for education, and a couple of lawyers.

As I have often said the opportunity wasn’t there for me when I was young, but God gave me a head full of common sense, and more guts than brains, or determination.

The only thing I have to regret is, I was very petite and there are a few in the mountains and a few people including grown women, made the mistake of taking my being tiny the wrong way, and ended up with a wildcat on their hands.

Thanks to Johnny and Ann Calihan for sharing a mess of green beans. Johnny said these are Blue Lakes and he likes them better than the all time favorite, white half runners. They were delicious, but white half runners can’t be beat. I know I sound like a hardheaded hillbilly.

Johnny brought me a small bag of cherry tomatoes that he knows I love.

Doyle and Betty Ison, before cold weather arrives I am heading back your way just to sit on that boat dock of a deck of yours.

I talked to my sister-inlaw Mattie Hall, and she seems to be adjusting a little better.

I still have Jerry’s last message to me on my telephone. I can’t seem to find the courage to delete it. I can still hear his laughter echoing in my head. I would get a mischievous streak and tease him. He would say, “Sissy, you are a sight.”

Letcher County Day will be here before I know it, and as usual I am not prepared.

Hayward Day, I want to see you and your beautiful daughter Kim who looks like her mother more every day.

Don and Betty Back, we missed you last year.

Bob Bryant, I hope you are able to mosey over, and, Glenora Eldridge, if you will come, I will gladly pick you up. Start making plans. Not meaning to leave anyone out, just pack up and come on.

Les and Pat Wagner enjoyed a much-needed mini vacation back in the mountains visiting with family. I know James and John enjoyed this as much as Les and Pat.

Well, I need to get this on its way.