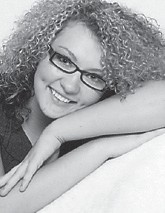 BIRTHDAY GIRL — Rachel Tackett turned 19 years old on Sept. 2. She is a 2010 graduate of Letcher County Central High School and is the daughter of Deanna Tackett of Whitesburg and Shawn Tackett of Roxana. She has a younger brother, Aaron, who is in the eighth grade at Martha Jane Potter Elementary School.

Are you enjoying this beautiful fall weather? I dare not say the word cold as someone may get a tad bit upset!

I really got a laugh after enjoying the columns of a couple of others. It seems as if I am not the only one who doesn’t care for that fourletter word spelled cold!

Have you ever heard the old saying ‘when it rains it pours’? Not referring to the weather, but it seems as if it is coming down in buckets pertaining to my family.

A couple of months ago my younger brother, Robert Hall, was involved in a very serious car accident. Robert has improved enough to be home with his wife, Ann, and the family, but he still has some problems.

Saturday night, my sister-in-law Wanda Hall called about midnight to say that my brother, Richie Hall, was on his way to Pikeville Hospital.

I was so tired from a very busy day that I never even asked how he was getting there. I just assumed by ambulance!

I didn’t realize how serious the situation was, as he was airlifted by helicopter from Whitesburg to Pikeville.

As it happened, Richie almost bid this old world good-bye. Richie has four blocked arteries and there’s nothing that can be done at this time as about five years ago he had five-way bypass surgery, plus he had stents a couple of times.

I debated whether to drive down to Pikeville, and I made a decision not to as I was exhausted and with having so much shortness of breath I was almost afraid to try it by myself. As I said, I did not realize how serious my brother was. Richie had had another heart attack! I think this is three in as many years.

At the present time Richie is doing all right. The doctor said that his body will produce more arteries, and he will feel pain while this process is occurring.

Richie and Wanda had spent a few days in West Virginia with their son, Tracy Deaton, and his family. While Richie and Wanda were there, he started experiencing quite a bit of pain and wouldn’t go to the hospital, even when they passed Pikeville earlier in the day Saturday as they were on their way home from West Virginia. Richie almost waited too long this time.

Please keep Richie and Wanda in your thoughts and prayers. I love this kid brother of mine very much, even though this may embarrass him with me saying so in public.

I stated above I was exhausted. Saturday was Letcher County Day in Harrison. I was at my usual camping spot at five in the morning after not much sleep Friday night to make sure that no one would get the shelter. By this time I am a seasoned early morning camper as I took a comfortable chair, a heavy blanket, a radio, book, and a spiral notebook, plus a coffee pot, and my favorite coff ee creamer.

At 8:30 or so I called Ann Calihan and Johnny Calihan came down to stand guard so I could go home and do a few things. I still forgot the broom and milk for others to use in coff ee in case they didn’t like flavored creamer.

We had some special guests as music was provided by a band called Almost There which featured Matt Glazer, Joe Parker, Barb Blasch, a girl who played the fiddle, I am sorry I didn’t get her name, Ernie Phelps, Larry Reese and Kevin Haggard along with Larry Smith who also joined in with the band.

Bob Bryant didn’t bring any musical instruments with him this time.

I teased Ben as I introduced him to someone and said he was going to be my next husband. Lavonne said I had to stand in line behind a woman named Doris from the Coon Hunter’s Club! After Ben tried to give me a chew of tobacco. I told him, I didn’t want to marry him after all.

Ben ‘Cornbread’ played the banjo after the band quit playing; he plays claw hammer-style. He is also my dancing partner at Coon Hunter’s Club once in a while! He is really a sweet young man and very courteous to his mom, grandmother and everyone!

We will meet once again at the same shelter the last weekend in September next year, if God is willing.

There was enough food to feed an army as usual.

I was asked by someone if Frick and Frack were real or did I make that up. I told Polly and we all had a good laugh, so Frick and Frack, you should have been there! It seems Frick and Frack are really popular names as my daughter Kay and her sister-in-law Debbie Ison used to be called that name. Humana Health Care has a commercial with a little girl and her grandpa saying Frick and Frack.

Shelby Bockover didn’t make it this year as she changed her mind at the last minute. There were several others who said they were coming and didn’t make it. The crowd was small, yet it was a wonderful time, a beautiful day, a little chilly at first, then it turned out gorgeous weather. Next year we have decided to start at 12 instead of 11.

Happy birthday to Clarence Halcomb, Oct. 8, he will be 92. He is one remarkable fellow, and is getting around well. He brought some of the woodwork he has done down through the years, and everyone always enjoys seeing these works of art!

Larry Smith was really amazed by the Clarence’s Chain of Life he carved without breaking a single chain, I think there are 92 links representing Clarence life from birth until now. It has been carved from one long narrow piece of wood.

Betty Ison brought pictures of the new addition to her and Doyle’s family, and I must say it is a beauty!

I intend to go visit Betty and Doyle before too long. I have let the whole summer slip by without enjoying sitting on that boat dock of a deck.

Gwen Huff Farmer, I wish it was possible for you to have been there. Shirley Wells, you would have fit right in also.

I mentioned how good the food was. Thelma and her family came a little late as they had a previous commitment, however what she brought when she got there, a vegetable tray, as well as a homemade stack cake, smelled and looked scrumptious. I was afraid to eat anything as I only nibbled on part of a piece of chicken, a bite of casserole, and some of Betty Ison’s delicious dessert.

I had three cups of tea. I never got to drink any as I kept setting it down and forgot where I set it!

Hello to Carl Boggs and his family, as you know you are still in my thoughts. There’s not a day goes by that Willamae doesn’t cross my mind.

Jessie Frazier, I hope this finds you getting along alright.

Hello to my brother Jerry and Mattie Hall, to my sister Loretta Church, and my brother Wallace Lee Hall. I may be heading that way in a couple of weeks.

Friday night, I went to the Coon Hunter’s Club and the music was good. Marvin Davis, the special musician I write about, was there. Marvin Davis could play that fiddle and make the worst of bands sound good, though the guys he picked with were a good group.

My computer got an extra jolt due to a wreck below our house, so I have to let it sit until my computer guy comes back from vacation in three weeks. My son, Keith Ballard, is kind enough to let me use his computer at his house. Actually Keith wants me to take his computer home with me, and I declined.

Belated birthday wishes to my daughter, Kay Gray, who celebrated on Sept. 30.

My leg is finally healing after I started soaking it in hot salt water. There are still some hard places that are worrying me; the doctor says it is damaged muscle and may never heal!

The shortness of breath is getting worse. I am going to find out what the heck is causing it, and of course my blood pressure is acting up.