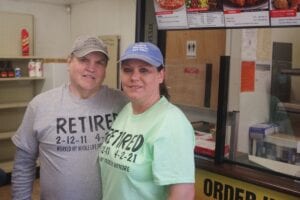 Time was, all gas stations were service stations.

Attendants pumped the gas for you, checked the air in your tires, checked the oil and even washed the windshield.

Most that have managed to stay open just pump your gas now, and they’re rare.

The last one in Letcher County closed Friday when owners Johnny and Melissa Collins locked the door of their Marathon station at Isom.

Johnny Collins said Jerry Banks first opened the station in 1974, not long after KY 15 was moved from the middle of Isom up the hill to where it sits now. The Collinses have owned the postage-stamp sized store in a tiny strip mall since February 2, 2011. When they opened, Melissa said, 37 coal trucks made regular stops there to fill up with diesel. Last week, there were two.

“We went through the coal decline, we made it through a pandemic, and now we’re going to retire,” she said.

Now that they’re not running that station anymore, they’ll be splitting their time between here and Bean Station, Tenn., where they have bought a campground and are busy getting it ready for people to start moving in trailers.

They’ll still live in Letcher County, but they’ll spend much of their time on the lake in Tennessee.

As for the service station, Melissa Collins said they’re negotiating with people interested in taking it over, it could still have a future. In addition to gasoline and diesel fuel, the station sold some groceries, snack items, soft drinks, tobacco products, and had a small kitchen and lunch counter where Melissa Collins and a couple of employees made hotdogs and hamburgers, pizza and hot wings, breakfast sandwiches and other sundry grab-and-go for the working people who stopped every morning.

“We’re hoping someone will take it,” she said. “There’s two or three interested.”

Unlike a lot of businesses that have suffered through the pandemic, Melissa Collins said business picked up at their station because people didn’t have to touch the gas pumps or get out of the car for basic needs such as a loaf of bread, a cold drink, or a quick lunch.

“Honestly, the pandemic helped us where we’re full service,” she said. “We did curbside (for food), and we boomed.”