Letcher County man is honored for work with mine rescue team 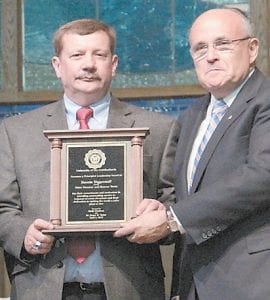 An Alpha Natural Resources mine rescue team trainer was recently recognized for his leadership as part of the “Forcht Group of Kentucky Center for Excellence in Leadership” lecture series held recently at the University of Cumberlands in Williamsburg.

This year’s theme of the lecture series entitled, “Principled Leadership in a Time of Crisis,” recognized area first responders including Alpha mine rescue team trainer Ronnie Biggerstaff, local police officers and firemen. Former New York City Mayor Rudy Giuliani was the guest speaker at the event and distributed the awards.

Biggerstaff, of Letcher County, is a trainer for four mine rescue teams in the Alpha organization. Biggerstaff trained the Black Mountain White Team, from Alpha’s Southern Kentucky business unit, that took top honors at the national mine rescue contest last October.

“Mine rescue is a passion for all of our team members. We train hard to be ready for a crisis and hope there isn’t one,” said Biggerstaff. “I’ve been blessed to surround myself with great team members who are highly dedicated and perform well under intense pressure. This is an honor to be recognized for a job I love.”

During his speech, Giuliani recalled the heroic efforts of the first responders on September 11th. He encouraged others in the audience to step forward and not shy away from being a leader in times of crisis.