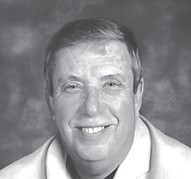 A Letcher County man who was the first non-attorney to serve as a state workers’ compensation arbiter has been named to the Kentucky Workers’ Compensation Hall of Fame.

Thomas “Tick” Lewis received the award May 17, and is an inaugural member of the group. The award was created to “honor those who have made significant contributions to Kentucky’s Workers’ Compensation system during their distinguished careers.”

Lewis is a lifelong resident of Letcher County. He was graduated from Morehead State University in 1970 and received a master’s degree from Morehead in 1972. He taught in here from 1971 to 1975.

Unable to make a living as a teacher, Lewis went to work for Beth Elkhorn Coal Corporation as an underground miner and moved into Safety Management for Beth Energy.

After that, Lewis was involved in Kentucky Workers’ Compensation in some capacity for 43 years. He was safety director for Cyprus Minerals until 1997 when he became the first and only non-lawyer arbitrator with the Kentucky Department of Workers’ Claims. He was promoted to Deputy Commissioner and served in that capacity until 2004.

He then returned to work in risk management in the coal industry until his retirement in 2018.

Lewis is one of the 20 to be inducted. Eleven of the 20 were chosen posthumously.