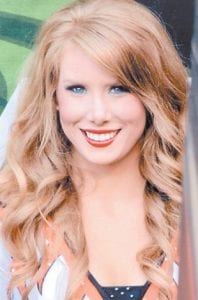 Sarah Gilliam, formerly of Whitesburg, who now lives in northern Kentucky, spends part of her time working as a customer service representative for Fifth Third Bank, but for the past four years has also been cheering on the sidelines as an NFL cheerleader for the Cincinnati Bengals. She is also a side captain and choreographer for the team.

Sarah grew up in Letcher County and was in the first graduating class of Letcher County Central High School, where she started her dance career on the school dance team. Sarah always dreamed of becoming a cheerleader for a professional team and spent a few years working her way up by dancing for the Lexington Horsemen and the East Kentucky Miners.

Being a part of the Bengals organization and to get to spend time performing in front of thousands of people is her dream come true. This dream has reached even further, as she has been voted unanimously by the team to represent the Bengals at the Pro Bowl, the annual All-Star Game held on January 27 in Honolulu, Hawaii. This is a one-time recognition, and she feels very blessed to have received such an honor.

After performing at the Pro Bowl, Sarah will finish up her season by going on a USO tour to the military bases throughout Alaska. Being on the field is a very amazing feeling for Sarah, but one of the best rewards is participating in the many community service and charity events she is fortunate to be a part of.

Sarah still regards Letcher County as home, and loves to know that her family and friends here are such a huge support for her. Her parents are David and Chelsey Gilliam of Whitesburg, Kentucky. Her grandmother is Maggie Johnson of McRoberts.