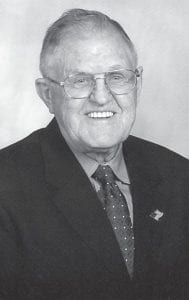 Graveside services were held in Arlington, Va., earlier this week for a Letcher County native who helped grow the Washington, D.C., Metrorail system into the secondbusiest rapid transit system in the U.S.

Delmer “Del” Ison, 91, died peacefully at his home in Lake of the Woods, Va., on September 19 while surrounded by members of his family. He was born July 21, 1921 to Grant and Mary Bell Stallard Ison in the community of Oscaloosa.

Ison served in the U.S. Army during WWII, and went on to receive his Juris Doctor degree from the University of Kentucky. He was married Ellen Brashears on October 28, 1942. She preceded him in death in 1993.

In 1960, Ison started working as risk manager for DC Transit, which later became Washington Metropolitan Area Transit Authority. He retired from the WMATA, where he became secretary-treasurer, after 26 years. The WMATA operates the public transportation system in the D.C.-area, including the 103-mile rapid transit system known as METRO.

Ison was married to Ramona McGuire Wilmoth, who survives him, on December 28, 1996 in Reston, Va., and they moved to Lake of the Woods in 2000. He was a member of the New Life in Christ Church in Fredericksburg, Va.

Ison enjoyed golfing, bowling and dancing. He was an avid fan of the Kentucky Wildcats and the Washington Redskins.

Ison was preceded in death by daughter Sheila Wellstone, sonin law U.S. Senator Paul Wellstone of Minnesota, and granddaughter Marcia Wellstone, who were killed in a plane crash in northern Minnesota on Oct. 25, 2002, while Sen. Wellstone was on a campaign trip. Ison was also preceded in death by brothers Earl Ison, Carl Ison, Forrester Ison and Harding Ison, and sisters Lovel Day, Avis Colson and Eveda Ison.

Donations may be made in Del Ison’s name to the American Cancer Society at www.Cancer.org.