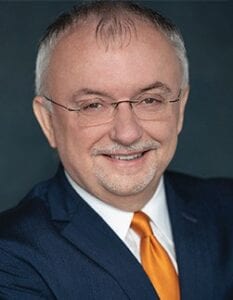 Letcher County native Michael Collins was among 10 journalists inducted earlier this month into the 41st class of the Kentucky Journalism Hall of Fame.

The son of a Letcher County coal miner, Collins is the White House correspondent for USA Today, the largest circulating newspaper in the United States. Formerly of Craft’s Colly, Collins is a Whitesburg High School graduate who earned his journalism degree from Western Kentucky University in 1984. While attending WKU, he interned for The Mountain Eagle.

Collins has been a Washington-based reporter for 20 years, first with Scripps Howard News Service, where he covered Congress and other issues for Scripps’ papers in Ohio, Kentucky, California and Tennessee. He has been with USA Today for five years and, in addition to covering the White House and Congress, has written extensively about trade, tariffs and the federal budget. Before arriving in the nation’s capital, Collins was a reporter for The Cincinnati Post and its sister paper, The Kentucky Post in Covington. He spent five years in Frankfort as The Kentucky Post’s state capital bureau chief, where he covered the governor and the legislature. He also served as night city editor and editorial writer.

“I’m a coal miner’s kid from Whitesburg, in the mountains of southeastern Kentucky (so) journalism was not an obvious career choice for me,” Collins said during the induction ceremony, which was held online May 4. “But what was obvious to me, even at a young age, was I had this incredible fascination with the written word.”

Pointing out that good journalism matters, Collins added that, “as journalists, we can improve people’s lives — every part of their lives from the air the air they breathe, to the food they eat, to the water they drink, even to where they send their kids to school.”

“It’s been said many times, and in ways far more eloquent than I can express, but journalism is a public service,” he added. “I believed that when I got in this business and I still believe it 30 years later.”

Collins becomes the fifth inductee into the Hall who has worked for The Mountain Eagle, joining Nehemiah M. Webb, who founded the paper in 1907 (1985), Tom and Pat Gish (1986), and community correspondent Virginia Harris Combs (2001).

The Hall was created in 1980 by the University of Kentucky Journalism Alumni Association. It is housed in the School of Journalism and Media in the Blazer Dining Hall Building on the Lexington campus. Nominees are inducted annually.