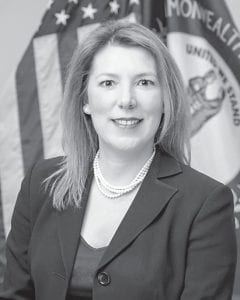 In her first two months as Commissioner of the Kentucky Department of Alcoholic Beverage Control (ABC), Letcher County native Christine Trout is already making an impact.

Trout was appointed as the department’s first female commissioner on Oct. 1 and has since overseen the final disposition of nearly 200 ABC cases, some dating back to as early as 2014, including appeals of license denials, penalty cases, appeals of city and county license denials and penalty assessments. Trout leads the first all-female ABC Board, with Carol Beth Martin serving as malt beverage administrator and Trina Summers serving as distilled spirits administrator. Together, the team has decades of experience in both state and local government as well as knowledge of the industry.

“Anytime there is change, it can be challenging for an agency,” said Trout. “As the new commissioner, my first priority is to ensure that the services we provide are professional and consistent. I am also partnering with industry members and sister agencies to increase economic development opportunities for the Commonwealth while balancing the need for compliance and oversight.”

Trout is also focused on using technology to move the department forward, including developing an online application system for initial licenses and targeted training programs for licensees. Currently, new license applications are filled out on paper, and ABC staff must retype and scan the information into the internal system. An online system is expected to save staff time and resources for the department.

An attorney with 14 years of experience in civil litigation and federal criminal defense, Trout was graduated from the University of Louisville with a bachelor’s degree in political science and received a law degree from the University of Kentucky. She previously served as chief of staff for the Personnel Cabinet and as a special assistant to ABC.

She is the granddaughter of the late Eva Trout of Mill Branch.