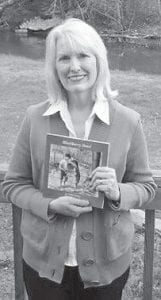 Debbie Mosgrove Hodson, a native of Letcher County now residing in Knott County, is the author of the new published children’s book, “Blackberry Bend”. The fictional story focuses on the mountains of Kentucky and the adventures of Austin and Abbey, who make a summer visit to their grandparents on Blackberry Bend. With titles such as ‘Black Gold and Blackberry Cobbler’, ‘The Depot’ and ‘Sunday Go to Meetin’,’ the book’s seven chapters are filled with fun and generous doses of mountain history and culture.

Hodson is the daughter of Fernoy and Shirley Mosgrove, former residents of Thornton and Mayking, who now reside in Naples, Fla. Letcher Countians ‘of a certain age’ often fondly recall the foot-long hot dogs and chili served at Fernoy’s Drive-In, the Thornton restaurant which Hodson’s father and grandmother operated for many years.

In speaking of “Blackberry Bend’s” story line, Hodson said, “Many of us from this area had special relationships with our grandparents and learned so much from them, every- thing from how to plant peas or make biscuits to how to recognize the trees and plants up in the mountains. It is important for young people today to continue to hear and learn the mountain wisdom, the family stories and history that bind us together as southeastern Kentucky people.”

The colorful illustrations in the book by Miriam Moyer, also of Knott County, bring ‘Blackberry Bend” to life as they highlight the opening of each chapter. From depictions of Abbey stringing beans with her grandmother to the overlook on Cobbler’s Knob, the details of each illustration provide visual pleasure for readers.

Four years ago, “A Mountain Rainbow”, Hodson’s first book, was published. Written as a children’s book and now in its second printing, it struck a chord with many adults as well across the region. “A Mountain Rainbow” and its accompanying study guide, which she created, have been used in classrooms throughout eastern Kentucky. The book’s touching story of young Nellie and Miriam Moyer’s watercolor illustrations, have made ‘ Mountain Rainbow” a special keepsake for many.

Hodson has brought her ‘literary sing-a-long’ and writing workshops to Martha Jane Potter Elementary and Fleming-Neon Elementary. Most recently, she donated a classroom set of her first book to Jenkins Elementary to honor her mother who attended the school in the 1940s. While there, she participated in a question-and-answer assembly with the students.

“People have asked where Blackberry Bend is,” Hodson said. “I suppose it could be almost anywhere in southeastern Kentucky. The story isn’t really a memoir and I didn’t have a particular place in mind. It came about, as stories often do, from snatches of life a person absorbs over time. Some of those no doubt did spring from childhood years I spent in Letcher County or the 35 years of marriage we’ve spent in Harlan and Knott counties. So, maybe it’s somewhere on Cowan in Letcher County or up around The Breaks in Pike County. Or way down on Laurel in Harlan County. I’m not sure. But I do know it’s a good place and a place like most of us from this region experienced at one time or other in our lives.”

“Blackberry Bend” was written as a follow-up to “A Mountain Rainbow”. Its story can stand alone and be enjoyed by readers unfamiliar with the first book. Copies of both books may be obtained in Whitesburg at The Cozy Corner. A signed copy of either book may also be purchased by mail for $12.95 (“Blackberry Bend”) and $10.95 (“A Mountain Rainbow’), plus $3 shipping and handling per copy, by contacting IvyStone Press, P.O. Box 50, Emmalena, KY 41740.