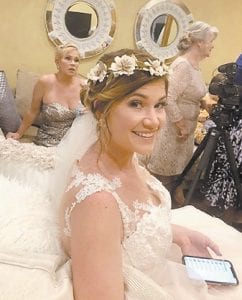 Jodi Gray Davidson, a granddaughter of Southern Ohio correspondent Rose Ballard, is pictured at her wedding to Carl Davidson.

Hello again everyone! It’s beginning to feel like early winter to me. My body can’t adjust to 90 degrees, and then back to the cold dreary days. Now I could stand some more of the hot days before the cold and the snow sets in for the long winter months from November to May.

My sympathy goes out to the family of Edward Gibson. As I read the obituary my thoughts traveled back through so many years, once more to my childhood. Now I had a rough and rocky way of growing up. These young ones had it worse in lots of ways than me. Ed was older than me, but there were several that were younger than me. Ed’s mother, Leona Hollins Gibson, was Harlan Hollins’s daughter. Harlan was a brother to my grandma, Rosa Hollins Hall.

Johnny and Leona Gibson moved up in Green Briar Hollow at Roxana after their daughter Martha Jane was killed in an horrific accident on Pine Mountain when she was a young girl. Leona had a nervous breakdown and was never completely stable for long from that time until her death many years later. Johnny did the best he could do to take care of the younger children. 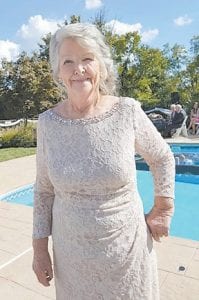 Darrel was old enough to take care of himself, and Bessie Jane was six months older than me. We were like sisters. She would wear my clothes to school. The two youngest, Stephen Ray and Earl William, just did the best they could to get by.

Stevie Ray went into the service when he was old enough, and then he got killed. He is buried in the Coots Cemetery on Big Branch along with his mom, his grandpa Harlan and several others

Johnny killed his son Darrel. I have no idea why he would do such a horrible thing. I had left home and was married with kids of my own when this happened.

Bessie Jane was very young when she died, and I know she married a man that was old enough to be her dad, or older. When Bessie Jane and I were 12 years old we canned green beans for Johnny, as Johnny asked Mommy to can them. Mom couldn’t because Daddy would have jumped on her, so she told me how to do it, and he paid me two or three dollars and I bought material to make me three skirts to wear to school as I started my freshman at Kingdom Come High School.

I was younger than Bessie Jane, but I was a year ahead of her in school.

If my memory serves me right, there was an older brother, Ralph Gibson, who was in the service for many years.

Sometimes I hear or read of how helpful people have always been in the mountains. Well I can tell you I don’t recall anyone being so helpful in the situation of this family.

There are times I wonder why I love those mountains that I still call home so much. There were several who only cared about that green back dollar, and wouldn’t give a child a half rotten apple that had fallen off the tree.

Yet I learned some valuable lessons, like how to work at a very early age. Minnie Whitaker took me to church, and that is all the religious training I ever had. Actually she was one of few who wouldn’t let the kids pick up fruit out of the ditch, next to the road.

I thank God every day that a way has been made for me, that I can have it a little easier in the remaining years of my life.

I’ve had to fight tooth and nail all my life to stand on my own two feet. I found out many years ago I wasn’t just a wife and a mother, I was a person, and I liked that feeling.

I will never let anyone mistreat me nor verbally abuse me, again.

My granddaughter Jodi and her new husband Carl are trying to get back to a normal life. Jodi took a couple of days from teaching. They have plans to travel to Italy for a honeymoon when school is out. I think they need a chaperone.

I have been to several beautiful weddings, and Jodi’s was the most elaborate that I’ve ever seen. As I look at the photos of the wedding, everyone captured the beauty.

Rev. Wilson was the pastor who married Kay and Clarence’s son C.J. and Shannon Gray. Again Rev. Wilson married my daughter Angie and Dennis Wiederhold at the Harrison Nazarene Church

Anna and Scott Nottingham were married in Scott’s church.

My son Keith Ballard decided to slip off to be married, as he was afraid I would object. I wish I could have locked him in a cage to save everyone all the heartaches this marriage and divorce have brought through the years, and is still happening.

My granddaughter Sarah Nottingham has another year of college, and I really hope she finishes her education before she gets serious with anyone. Education is something no one can take away from you. Sarah has a four-year scholarship at N.K.U. She has to maintain an A in order to keep the scholarship. So far she has managed to do it, plus she works part time

From that simple young uneducated girl who came out of those mountains so many years ago, I am proud of all my children and grandchildren of their accomplishments.

There’s only one thing that bothers me, there’s so much that has changed in today’s society. Sometimes I wonder what happened to common decency. It is like common sense, and it has evidently disappeared.

Finally I have talked to Pat and Les Wagner, but Pat is still not feeling her best. Les and Pat miss not going to their place in the mountains.

Johnny and Ann Calihan are still enjoying the memories of their trip to the mountains and time spent with family and friends. Ann had a surprise waiting when she came home, as I stopped by the paw-paw tree I have been visiting for a couple of years.

They didn’t bear this year though I did find two. One had fallen off the tree and it was almost ripe, the other was hanging on to the tree branch. I found a long, broken limb and knocked it off so Ann had two paw-paws waiting for her.

Their daughter Sue Wagner is still having a rough time with her fractured shoulder. Please keep this family in your prayers, as Sue is in so much pain and is limited to what she can do.

The preemie twins are doing great. As I said before, these will be one set of spoiled twins when they get big. They are lucky to have such loving hands to hold them, and hearts filled with love.

Blackey Days is Oct. 12 and 13. Please mark your calendar. I hope my health is good then.

On Oct. 6, they will be fundraising for Kingscreek Fire Dept. at Kingscreek Park. Sunrise Ridge and Will Caudill & Rt. 7 will be performing. I don’t have the time so please get in touch with Bill Meade.

Thanks, Bill, for having this, but since it is a week in the difference in the dates of Blackey Days, I am sorry I can’t make both trips.

Anyone that would like to donate to this worthwhile event, you can send a check to Kingscreek Fire Dept. in Roxana. You never know when you will need the help.

The clock is catching up with me. Until next time, Rose Ballard, 9110 Lawrenceburg Rd., Harrison, Ohio 45030, email Bluegrassmama4@aol.com.