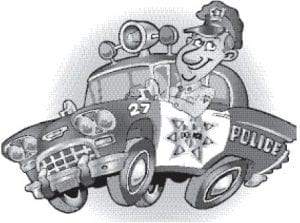 • At 2:15 p.m., the Letcher County Sheriff ’s Office is asked to asked to unlock a gold Ford F-150 pickup with the keys locked inside.

• At 4:30 p.m., the sheriff ’s office is contacted by a Little Colley woman advising that a man at Midland Drive, Dusty Shell, stabbed Cecil Shell in the eye with a knife and also stabbed a dog before leaving in a brown car with Kathy Helton. EMS assistance is requested at the scene.

• At 9:30 a.m., a Mayking man calls the sheriff ’s office to report 10 harassing telephone calls made to his home between November 25 and December 2. The caller plays a recording of the song ‘Little Red Riding Hood,’ then asks to speak to a certain person. The complaining party is nearly certain of the identity of the caller, believed to be a woman aged 21 or 22 years old. The complaining party agrees to obtain equipment to record the next call, and will also purchase trail cameras to take photographs of anyone approaching the house.

• At 10:48 a.m., a caller tells the sheriff ’s office that a male being sought on an arrest warrant is sitting at the mouth of Koyle Branch at Gilley in blue Chevy S-10 small pickup with a king cab.

• At 3:42 p.m., a deputy drives to a home at Mill Branch, Roxana, concerning a stolen property case but is unable to make contact with the party in question.

• At 11:26 a.m., the sheriff ’s offi ce is asked by the Kentucky State Police in Hazard to respond to an alarm sounding at Sydney Drive, Isom. A deputy honors the request and finds everything to be okay.

• At 1:06 p.m., a Pine Creek man calls the sheriff ’s office to report an acetylene regulator gauge and Victor torch head missing from his truck, which is parked in his driveway. The caller says he last saw the missing welding equipment at 3:30 p.m. the day before and reports the name of a man he believes is responsible for the theft.

• At 4:29 p.m., the sheriff ’s office is alerted by an employee of Austin Powder Company that blasting caps turned up missing during an inventory conducted earlier today at their location at 152 Manton Road in Martin, Ky.

• At 4:42 p.m., a woman calls the sheriff ’s office from Hobart’s Bottom Road, Jeremiah, to report the theft of a saw and deep well pump.

• At 5:03 p.m., a woman reports to the sheriff’s office that someone is calling her home multiple times each day. She says she has no idea who the caller is, but the same female is making the calls from multiple numbers.

• At 10:48 a.m., a man calls the sheriff ’s office from Hawk Drive, Deane, to report a stolen orange riding lawnmower and chainsaw. The man said he returned home at 7 a.m. this morning to find his basement door open and equipment missing. He said the mower and saw belong to two other men, one who lives in Louisville and the other his landlord who is a patient at the Eastern Kentucky Veteran’s Center in Hazard.

• At 4 p.m., a sheriff ’s deputy reports he is taking a male juvenile to the office of Court Designated Worker Mike Watts.

• At 4:02 p.m., a sheriff ’s deputy is dispatched to location on Kentucky Highway 15 near Isom to unlock a vehicle with the keys locked inside.

• At 4:35 p.m., two sheriff ’s deputies transport a male subject to Hazard, where he is being committed involuntarily to the ARH psychiatric center.

• At 8 a.m., a deputy sheriff reports he is investigating a sexual assault case in which the victim was taken to the Whitesburg hospital for treatment.

• At 2:03 p.m., a deputy sheriff reports he is visiting a location at Colson in connection with a sexual assault investigation he opened earlier this morning after visiting with the victim at the Whitesburg hospital.

• At 2:44 p.m., a deputy sheriff reports he is finished with a funeral escort to which he was assigned.

• At 3:44 p.m., sheriff ’s deputies are looking for a male subject at Isom who is carrying a bag and acting odd after getting out of a passenger car. The man, described as being tall and slender with dark hair and dressed in a tan jacket, Levi’s and a cap, was last seen on the railroad tracks behind a gas station.

• At 4:15 p.m., an anonymous caller alerts the sheriff ’s office about a Facebook posting by a young girl from the Isom area who is pleading for help because her father is molesting her and her sister and has pills all over the house.

• At 4:16 p.m., a deputy sheriff reports locating a man who had been acting odd in Isom and was last seen on the railroad tracks behind a gas station. The man tells the deputy he had one beer with him and drank it. The deputy says the man is not intoxicated, and that everything is okay.

• At 4:18 p.m., a woman calls the sheriff ’s office to request a welfare check at the home of an elderly woman who lives with a son who is beating her. The caller says neighbors will not help the woman because they are afraid of the son.

• At 4:53 p.m., a deputy sheriff reports that he just spoke with a young woman reported to have posted a Facebook message seeking help because her father was sexually abusing her and her sister. The girl told the deputy that everything is okay, and that the call for help was written by a brother who had hacked into her Facebook account.

• At 5:27 p.m., a deputy sheriff reports visiting the home where an elderly woman was reported to be living with an abusive son. The son tells the deputy the mother has gone to stay with a daughter who lives out of the area, a claim the deputy was able to verify.

• At 7:07 p.m., a deputy sheriff is dispatched to Seco to check on a white pickup whose occupant is reported to be acting in a suspicious manner outside the Seco Post Office.

• At 9:51 p.m., a sheriff ’s dispatcher is alerted about a situation that is developing at the Letcher Elementary School Gymnasium. Police assistance is needed at the gym to maintain order after game officials ejected parents who were acting out of control.

• At 11:22 p.m., a deputy attempts to locate a person named in an emergency protective order, but found no one home at the Colson address.

• At 11:23 p.m., a deputy reports that everything is okay at a home in Allen K Hollow, Little Colley, where an alarm had sounded.