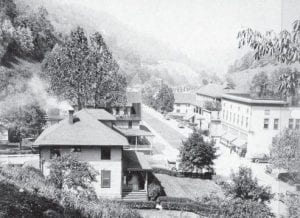 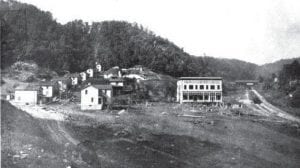 It took 300 million years to form this coal and about 60 years to mine this seam, which gives you the perspective of how fast our resources can be used up. This particular coal seam was responsible for the development of the L&N Railroad and CSX Railroad in northern Letcher County. Also, the following towns were built to mine this seam: Jenkins, McRoberts, Hemphill, Neon, Fleming, Seco, Kona, Millstone, Sergent, Thornton and Mayking.

This story is based on conversations with my father Bill Edmiston who moved to Letcher County to help mine this seam.

My father was born in Rockcastle County, Ky., and raised by the Anderson family. When the coal boom opened up the mountain areas, the entire Anderson family moved to Keokee, Virginia, and later to Haymond in Letcher County.

The Haymond mine was very successful since the coal was used for by-products as well as coking coal for steel. The coal tipple was located in the middle of the Haymond coal camp and the L&N pulled the loaded coal cars every day. The mine advanced in all directions, which was Kona on the south and Consol Coal Company to the north and Payne Gap to the east.

It has been said the best grade of coal is found in the upper reaches and higher elevations of the watershed. This is certainly true in Letcher County since it is the headwaters for the Kentucky, Big Sandy and Cumberland Rivers. Geologists must have recognized this quality early for the L&N Railroad to extend this far to get this seam of coal.

The Elkhorn Coal Company built the entire town of Haymond, named for Tom Haymond, the superintendent for Elkhorn. The town was self sustaining with a hospital, dentist, commissary and silent movie theater. Company scrip was issued and you did not need to leave town for necessities or otherwise. Tennessee Ernie Ford’s " Sixteen Tons" song with the phrase "I owe my soul to the company store" is so true. This is how my mother and father met. She worked at the company store and sold tickets at the theater.

The Haymond mine had big production until the 1930’s. By this time, my mother and father had moved back to her Morgan family farm near Mayking. My father and county engineer Roy Crawford built a modern service station in Cumberland and then the Depression came. My dad was saved by Franklin D. Roosevelt’s New Deal which gave him a job constructing Highway 421 from Harlan to Virginia.

In those days you could only work three days and then lay off to let others work three days. Things were so tough my mother said Herman Hale (the Bank of Whitesburg president) told her if she would pay five dollars per month he would not foreclose on her Morgan family farm.

My father then came back to Letcher County and worked for Consol at the McRoberts mine. He worked this mine to tie up with the Jenkins operation. He once told me he traveled 17 miles underground with his gathering motor and eventually arrived at Jenkins to dump the coal. My father then moved to Rockhouse Creek to mine No. 3 for Consol. This demonstrated how the upper watershed was mined first and then moved to lower elevations, which the Rockhouse seams were.

This story is told to demonstrate how the No. 3 coal seam impacted our family and other families. My father only had a 3rd grade education, but was able to obtain the necessary mining papers and was a key person at Haymond. My entire family graduated from the Mayking Grade School, where Ritter Fugate taught all of us. Bro. G. Bennett Adams was our Old Regular Baptist preacher during this time and also taught me 7th grade.

My friends in Mayking included postmaster Lindsey Webb, who would always have free candy provided you were a good Democrat. There were a lot of good Democrats in FDR’s time since he was a savior during this time in history.

My other good friend in Mayking was Aunt Doll Webb. She would let me come into her store to warm up on a cold morning. She would also save for our family our allotment of bologna, lard and sugar during the rationing years.

These are some of my great memories of Letcher County. And, the more I think about it, the mining of the No. 3 Elkhorn seam has been a significant part of Letcher County’s development and history. Still, when I cross the Letcher County line at Garner Gap, I still feel like I am "coming home."

Now living in Lexington where he served as city engineer, Jack Donald Edmiston is a graduate of Whitesburg High School and the University of Kentucky. He has been married to his wife Lois for 53 years. They have three children and four grandchildren, including triplets.