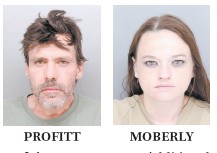 A man and woman already facing criminal charges in Letcher County are now scheduled to stand trial in Cincinnati later this month on drugand weapon-related charges filed against them in late July.

The two were booked into the Hamilton County Jail in Cincinnati on July 28 at 1:27 a.m. Additional charges of possessing drug abuse instruments and illegal use or possession of drug paraphernalia were “ignored” by the grand jury there.

Profitt, of 339 Cane Hollow Road at Camp Branch, was released from custody on Tuesday and is scheduled to return to Cincinnati for trial on August 23. However, Profitt must first appear before Letcher District Judge Kevin Mullins on August 22 for a “bond status hearing” that was set after the state Department of Probation and Parole submitted an affidavit to the court on August 10 stating that Profitt’s arrest in Ohio leaves him in violation of the conditions of a bond release agreement entered in June.

On June 6, Profitt was arrested by Letcher County Deputy Sheriff Alicia Congleton and charged with first-degree possession of methamphetamine (first offense). He was released from the Letcher County Jail on June 8 after posting a surety bond and agreeing to refrain from the use of drugs or alcohol. Judge Mullins also ordered Profitt at that time to have no weapons in his possession and to submit to random drug tests.

Moberly, of 778 Highway 1148 at Isom, was ordered to remain in the Hamilton County Jail until at least the August 23 trial date because she was already wanted in connection with a January 2018 indictment charging her with second-degree escape. Moberly, already facing a March 2017 indictment charging her with manufacturing methamphetamine, was placed under house arrest after she was indicted in May 2017 on a charge of promoting contraband in the Letcher County Jail, but then cut off her ankle monitor.