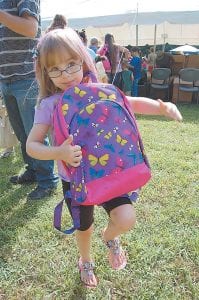 READY FOR SCHOOL — Five-year-old Elizabeth Hall hugs a backpack filled with school supplies she received at the Letcher County Kids Day Back-to-School Bash at River Park in Whitesburg on July 22. The Kids Day committee and the Family Resource and Youth Services Center (FRYSC) provided the backpacks. Elizabeth is the daughter of Tonya and Anthony Hall of Whitesburg. (Photo by Sally Barto)

Letcher Elementary School students can expect to walk on new tile in classrooms and hallways when school starts August 8.

While students and teachers have been on summer break, contractors removed all asbestos tiling from the school building. The tile had been in the building since it was built in 1959.

About five years ago, a second layer of tile encapsulated original tiles in the school hallways. Both layers of tile has been removed and replaced.

The maintenance department for Letcher County Public Schools has spent the majority of the summer leveling concrete floors and laying 25,000 square feet of new tile.

“The maintenance guys, I have to brag on them,” said Asst. Supt. Twyla Messer. “They have done an awesome job. The tile looks beautiful.”

Messer told the Letcher County Board of Education at its meeting Monday night that after the maintenance employees finish laying tile in the hallway on Tuesday, they will need to address issues at other schools in the district in preparation for the beginning of the school year.

Supterintendent Tony Sergent told the board that tile in the cafeteria could be installed during Christmas break unless an emergency takes precedence.

“There is tile in the cafeteria,” said Sergent. “It just doesn’t look good.”

In other business, Mountain Comprehensive Health Corporation has been awarded a grant through the U.S. Department of Health and Human Services Health Resources and Services Administration (HRSA) to expand its telemedicine services with the school-based clinics in Letcher County.

Dr. Van Breeding, who oversees MCHC’s schoolbased clinics, said practitioners will begin using telemedicine in order to provide services for students every day in every school in Letcher County.

With telemedicine and a medical assistant, a practitioner is able to listen to a student’s heart and examine ears and throats via a computer. Similar to the way FaceTime works on iPhones and iPads, the patient and practitioner will be able to see and hear each other on computer screens.

“I wouldn’t put anything out there for your children or your employees to use that I wouldn’t use myself,” said Breeding.

MCHC will soon purchase 10 telemedicine units with grant funding. Services provided by school-based clinics will be available every day to all students in Letcher County by a practitioner onsite or by telemedicine by the spring semester, Breeding said.

“We might not be there onsite but we’ll be there by telemedicine,” said Breeding.

MCHC has school-based clinics in Letcher and Perry counties and is in the process of expanding into Bell County.

Whitesburg Architect Bill Richardson told the board that progress has been made in getting a new boiler installed at Arlie Boggs Elementary School before school starts. The site has been prepped and propane tanks are in place.

• approved the second reading of the Kentucky School Boards Association’s annual updates and reviews of the board’s policies and procedures.

• approved a contract with MCHC to provide drug screening services and pre- employment physicals for new employees of the school district. Cost is $100 per screen for the 2016-17 school year.

• approved a service agreement with the Cabinet for Families and Children for the upcoming school year.

• approved a memorandum of understanding with MCHC’s Little Apple Daycare to allow MCHC to operate an onsite daycare at West Whitesburg Elementary School during the school year.

• approved a memorandum of understanding with MCHC to provide medical providers and services through its school-based clinics for the upcoming school year.

• approved a memorandum of understanding with Operation UNITE (Unlawful Narcotics Investigation, Treatment and Education) to provide three math tutors for the upcoming school year. In exchange, units on drug prevention will be taught in participating schools.

• learned of the following certified retirements: Anita Bentley, an art teacher district wide, and Jeffery Breeding, a teacher at MJP.

• authorized Supt. Sergent to take any action necessary for the opening of the 2016-17 school year.

The board went into executive session at 7:22 p.m. to discuss an individual employee and potential litigation with Roger Hall in a workers’ compensation case. The board came out of closed session at 8:15 p.m. and Board Chairman Will Smith said no action was taken while in closed session.

The next board meeting is set for 6:30 p.m. on Aug. 22 at the Letcher County School Bus Garage.