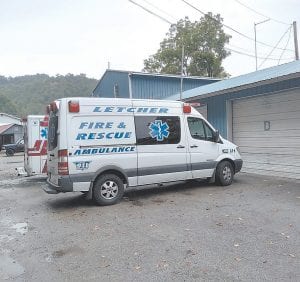 At left, Letcher Fire and Rescue’s only two running ambulances sit outside the fire department on KY 7 South at Jeremiah. After a leadership shakeup this week, the new fire chief, Wallace “Spanky” Bolling, the EMS director and board members say the department is in bad financial condition. Above, Bolling works in the fire truck bay at the Letcher Volunteer Fire Department this week. (Photos by Sam Adams)

Deep in debt and struggling to keep its doors open, Letcher Fire and Rescue has replaced its longtime leader and is asking the public for help.

The three say the department is struggling to survive, and are asking the community for help.

“Everything’s past due — comp, insurance, everything,” Bolling said.

Gilley said the group met with the department’s accountant Monday morning, and found a minimum of $47,453 in past-due bills. More than $22,000 of that is for workers compensation insurance, Gilley said.

“We’re going to have to have a community meeting and ask for help,” he said. 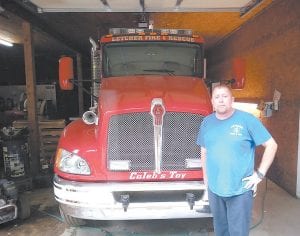 The first meeting is scheduled for 6 p.m. Thursday at the Blackey Community Center.

Bolling said the figure Gilley gave is just what is due or past due now.

“We know there’s more debt than that, but that’s what we can see right now,” he said.

Bolling said the department can’t borrow money to meet its immediate needs because everything the department owns, including all of its fire trucks, ambulances, the fire station, and the storage buildings, is collateral for loans taken out with a Chicago finance company.

“If this loan defaults, everything is gone,” he said.

He said Monday night that he felt better about the chances of coming out of the financial hole than he had that morning, saying members of the community had been calling all day to offer support.

District 2 Magistrate Sherry Sexton, who was appointed as a temporary member of the fire department board of directors, said Tuesday that the board members had been able to talk to everyone to whom the department owes money, and has worked out payment plans to keep the doors open. Workers compensation, which had been the department’s biggest worry, has also agreed to payments, Sexton said.

“We have from now till March to catch up,” Sexton said. But, if the department is still behind in payments then, the insurance will be canceled.

The department will continue to operate, Sexton said, and will be able to make the next payroll.

“They got their money from last week’s runs, so they are going to be able to pay people,” she said.

“I think they’re going to be alright in the long run,” Sexton said.

The change in leadership took place at a meeting of the department’s board of directors, Bolling said after membership “got wind of a proposed sale to Lifeguard Ambulance Service,” a privately-owned, for-profit service, and called board members, who called a meeting at the fire department Sunday night. When the meeting was over, five employees, including Chief Gary Rogers, had left the department, several members of the department said.

“They just didn’t want a private company to take over the ambulance service, and that’s not going to happen,” Sexton said.

Gilley said he doesn’t want to “throw stones,” but he does want residents of the area to know the challenges the department is facing. He and Bolling said Neon Fire-Rescue has offered to provide ambulance service to the west end of the county if needed while Letcher works out its situation, but Letcher still has to raise close to $50,000 as soon as possible.

Bolling is the son of former Chief Wallace Bolling. His father joined the fire department after the older Bolling’s brother died, and started bringing his son to the department when he was a toddler. Spanky Bolling said he has been there too long to watch it collapse.

The department just bought two Dodge Sprinter ambulances, but one of those has been in the shop for a month because of an ignition switch problem. Gilley said he told the garage not to do anything else to it because the department can’t afford to pay for the repair.

The department has only two ambulances that are running, and five fire engines and tanker trucks. Bolling said most people in the Letcher area now have a fire insurance rating of six, but if the department folds, it will increase to a nine, meaning higher homeowner insurance rates.

The department has some billing out that hasn’t been paid, but Bolling and Gilley said they have no idea how much or when or if the money will arrive. Until it does, they said they’re stuck asking the public for donations.