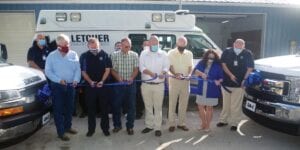 Delayed by paperwork and the COVID-19 pandemic, Letcher Fire and Rescue on Tuesday finally cut the ribbon on a new Advanced Life Support service for western Letcher County.

The new service had been scheduled to open June 20, but delays in processing the paperwork held it up until this week. At 8 a.m. Tuesday, the service officially started.

Emergency Medical Services Director Shawn Gilley said he was relieved that the service is finally open, replacing the Basic Life Support service that the department has offered for the past 15 years.

“We were nervous because of coronavirus,” he said. “It hit us pretty hard, monetary wise.”

With calls down, and run reimbursements down, he said it’s been tough to get going, but Letcher is managing to pay paramedics $16 an hour, one of the highest, if not the highest, starting wages in the region. As a result, Letcher has medics from all of Kentucky working there. One drives from Frankfort and drives back when his multi-day shift is over. Another comes from Virginia. Two come from Pike County, one from Harlan County, and one from Letcher County.

A year ago, Letcher changed its leadership and approached the Letcher Fiscal

Court about help staying afloat. The service was broke, and owed more than $300,000 to a Chicago loan company that was threatening to foreclose. The county fiscal court voted to co-sign a loan through the Kentucky Association of Counties to help get the agency back on its feet. County Judge/ Executive Terry Adams said Tuesday it was a good decision, and the ambulance service did everything else on its own.

“ They’ve got a loan through KACO that the county co-signed. We’re responsible for it, but they’re paying it back,” he said.

Adams, who lives in Letcher’s service area, said getting the ambulance service back on its feet and opening an ALS service is a big step forward for the county.

“If you ever need that service, you can’t put a price on it,” he said.

Advanced Life Support (ALS) is the top level of care on ground ambulances, with medical services being performed by paramedics, who have an education comparable to a registered nurse.

State Rep. Angie Hatton noted there is a serious shortage of paramedics now because the wages are so much lower than nurses’ wages. While paramedics’ salaries average about $41,000 a year in Kentucky according to Salary.com, registered nurses in the state average $60,000 a year.

Paramedics have to become emergency medical technicians first, which includes classroom training and clinical training in an ambulance, and pass a national standardized test for EMTs. Once they receive that certification, they can enter school again to become a paramedic, which again requires classroom training, more intensive clinical experience on an ambulance and in multiple departments of a hospital, and another national standardized test for paramedics. Like nurses, they must keep current certifications in cardiopulmonary resuscitation (CPR) and Advanced Cardiac Life Support, Pediatric Abusive Head Trauma, and Pre- Hospital Trauma Life Support, in addition to refresher training in obstetrics and other fields.

“With the time and money that takes, they could come out with a nursing degree,” Hatton said, adding that many people choose that route because of the pay.

She said Lifeguard, a large for-profit ambulance company, has begun offering tuition-free classes and paid on-the-job-training, and that might be a route other smaller services have to take. Still, she said, salaries pay a big role in the shortage. Paramedics are often responsible for choosing treatments and medications in the field based on written protocols without any direct contact with a doctor.

“It’s a lot of responsibility for not a lot of pay,” she said.

“They couldn’t afford to feed their families,” Turner said.

Medics and EMTs often work extended shifts of 48 to 112 hours straight, a safety issue when they are expected to drive long hours, often at high speed, and make decisions on medications and life-saving interventions. Turner said safety was one of the reasons Lifeguard gave for cutting overtime.

He said state officials are working to find ways to make EMS a more desirable career, but have not yet found a solution.

While the state offers incentive pay for trained police officers and paid firefighters, there is no similar program for EMS. Turner said he did not know why that had never been considered.

The shortage is so bad, the Kentucky Board of Emergency Medical Services has waived some of the relicensing requirements during the pandemic, renewing licenses for people who had allowed theirs to lapse, and allowing others to renew with a promise that they will complete their retraining by a specific time in the future.