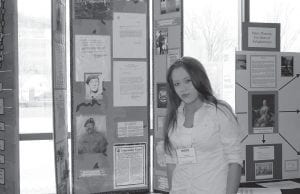 Ask Shai Boyd anything about former Letcher County Sheriff Ben Buster Taylor and she can answer your question knowledgeably and with confidence.

Miss Boyd, a senior at Letcher County Central High School, has spent the last couple of months interviewing county residents, veterans and Taylor’s wife, Ramona, about details of the highly-decorated veteran and former sheriff who died in 2007 after a long battle with cancer.

“She really just stepped up to the plate,” said Kim Sergent, a teacher at LCCHS. “She really got out there and wanted to know who he was.”

Miss Boyd, the daughter of Rhonda and Michael Boyd of Partridge, won first place in the senior individual exhibit category at the state National History Day competition in Frankfort on April 18 for her exhibit titled “Ben Buster Taylor: Legend of Letcher County.” She also won $200.

“This is an incredible honor for her and our school, but what has made this extra special is that she won using a Letcher County topic,” said Sergent. “An added honor is that she also won the Best Kentucky History topic award against every topic at the competition, which means she is positioned to win big at the national competition in College Park, Maryland in June.”

At the national competition Miss Boyd is vying for college scholarships and up to $1,000 in prize money.

Miss Boyd said she has competed in the National History Day competition before and noticed that students usually don’t choose local topics.

“There are a lot of people who deserve to be honored and if I had to pick one it would be Ben Buster Taylor,” she said. “He is the ultimate soldier. He was just so humble about everything he did. ” Miss Boyd said she was pleased to learn during her research that after all the honors and recognition Taylor received he chose to return to Letcher County. She said she had planned to move away from her home county, but now wants to stay.

“You should put your effort here and try to make home better,” said Miss Boyd. “He traveled everywhere and he still chose to stay home. He came back and made Letcher County better.”

Taylor was a retired sergeant major with the United States Army Special Forces, known also as the Green Berets. His rank of sergeant major is the highest an enlisted person can hold in the U.S. Army. Miss Boyd said she thinks it is important for people to know former President John F. Kennedy personally handed Taylor the beret he wore.

“I don’t think there is anything I don’t know about him,” she said.

Taylor died December 12, 2007, after a long battle with cancer. He was 71. His ashes were buried with full military honors on January 4, 2008, at Arlington National Cemetery.

Taylor served in both Korea and Vietnam and was one of the first regular Army soldiers to join the Special Forces. Taylor represented the Green Berets as a pallbearer during the funeral of President Kennedy, who was assassinated in November 1963.

After leaving the military, Taylor owned and operated a trucking company before being elected sheriff of Letcher County.