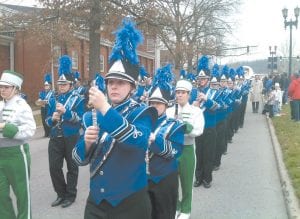 Members of the Jenkins and Letcher County Central High School bands joined Tuesday to represent Letcher County during a parade from the streets of Frankfort to the Kentucky State Capitol. The parade was held as part of the inauguration of Gov. Steve Beshear, who becomes only the third governor in Kentucky’s history to serve consecutive terms. Beshear, a Democrat, is 67. See related story inside. (Photo by Dan Brennan)