Letcher jockey was top rider for owner from Knott County 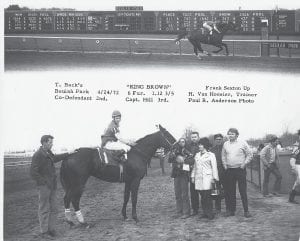 Thomas Back’s thoroughbred racehorse King Brown, with Letcher County native Frank Sexton in the saddle, dominated the field in this April 1972 race at Beulah Park, then located near Columbus, Ohio. Back is seen standing second from the left of King Brown, a horse which he bought for only $1,500.

When The Mountain Eagle featured a story last summer about two sets of Letcher County brothers who went on to succeed as thoroughbred horseracing jockeys, few readers paid more attention to the report than former racehorse owner Thomas Back.

Back remembered one of the jockey brothers — Frank Sexton — from the days when Sexton was Back’s go-to rider on King Brown, a thoroughbred horse that won 13 races under Back’s ownership in the early 1970s.

“I really liked Frank’s riding,” said Back. “He was an excellent jockey.”

Frank Sexton, who died at age 64 in Letcher County in 2006, and his brother Don Sexton, 76, now living in Deland, Florida, were raised in the community of Sergent and became jockeys after Frank moved to Cincinnati to find factory work in the very early 1960s. The Sexton brothers, who found success at several racetracks in the Midwest, followed in the footsteps of Kona brothers Lois C. Cook and William McKinley Cook, both of whom were good enough to earn mounts in the Kentucky Derby — in 1955 and 1956, respectively. 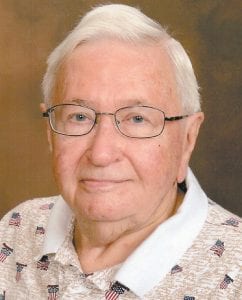 Back, a 76-year-old Knott County native, remembers feeling lucky when Frank Sexton would accept rides on King Brown, who often ran at River Downs in Cincinnati or at Latonia Racecourse (now Turfway Park) in northern Kentucky.

“I would use Frank every time if he was available, but he wasn’t,” said Back. “In the early 1970s he had a lot of stomach problems and he only took the good mounts.”

If being raised in the coalfields of far southeastern Kentucky made it unlikely the Sextons and Cooks would become successful jockeys, Back was equally as unlikely to become a thoroughbred horse owner in “The Sport of Kings,” so named because of the large number of wealthy owners the sport attracts.

Born and raised on Sugar Branch of Breeding’s Creek near Redfox, Back, now of Cincinnati, often visited Letcher County as a youth, especially the old Isom Stockyards. After graduating from Carr Creek High School and moving north to find work, Back spent 16 years with General Electric followed by 37 years with Rockwell International and its spinoff automotive business Meritor Inc. in northern Kentucky. He retired last year.

While working for G.E.’s Blue Ash plant near Cincinnati, Back became a huge fan — and expert handicapper — of thoroughbred racing. Back, who said he would spend two hours each night studying the next day’s entries and past performances in the Daily Racing Form, became so good at winning large amounts of money on small bets that his bosses and fellow workers would follow him to River Downs or Latonia in hopes he would tell them which horses to bet in which races.

Back eventually turned his betting prowess into horse ownership by placing a winning “claim” on the three-year-old King Brown in a “$1,500 claiming race” in which all the horses running were put for up for sale at that price. In part because of the talents of Frank Sexton, King Brown went on to win 13 races out of the 41 starts the horse made during the two years and 11 months Back owned and raced him. King Brown also earned money for Back by placing (finished second) or showing (finished third) in many of the races he didn’t win.

Back says his experience as a thoroughbred owner shows that everyday working people can purchase and have success with a decent horse even if they don’t have a lot of money. He said the same goes for betting races, especially with thoroughbred tracks now offering exotic bets such as the 50-cent trifecta or 10-cent superfecta, both of which can result in big payoffs for those who successfully pick the top three or four race finishers in order.

Back still laments the day he nearly won $450,000 after placing only $10 worth of bets on a “Pick 6” event at Turfway Park. While Back just missed picking the sixth straight race winner, most of them at long odds, he still won $1,500 for picking five of the six winners.

Back also remembers the times when racetrack employees would become irritated with him because he was holding up the line at the betting window to make one of his low-cost bets.

“Tracks don’t like for you to make a 10-cent bet at the windows when someone is in line behind you waiting to make a $200 and it is one minute until post time,” he said. “They have machines you can us to make any type of bet, but I never used one. I understand why the track and better would be upset with me.”

While betting clerks may have sometimes been upset with Back, he had no problems when it came to getting along with Frank Sexton and the other jockeys he worked with, in part because he always bought a $10 win ticket for the jockey who was up on King Brown or the other horses he owned. If the horse went on to win at decent odds, that winning bet would go a long way to helping jockeys accustomed to getting 10 percent of a race purse plus a $20 riding fee.

According to Back, Sexton was one of the leading jockeys in Ohio and Kentucky because he understood the sport well and knew how to get a horse to be first to the finish line no matter what.

“Frank didn’t need a trainer to tell him how to ride,” said Back. “He knew how to ride the horse and would usually find the best way to ride to a win.”

Back said Sexton’s mannerisms and small size also helped him become so successful.

“Frank was very soft spoken and the safety of the horse was the most important thing to him,” he said. “Frank was very small and could eat all he wanted and not gain weight. He could ride the horses that were assigned very light weights, like 104 to 105 pounds with his saddle. A lot of jockeys had to starve themselves to do 118 or 120 pounds. Frank could ride horses those heavier jockeys couldn’t and have a bigger and better saddle instead of just a piece of leather to sit on.”

In addition to his successes at horseracing tracks, Back also had success as an employee at G.E. and Rockwell/Meritor. In his early days at G.E., Back became president of the 600-member Local Union 1198 of the International Brotherhood of Electrical Workers. He retired from Rockwell/ Meritor last year having not missed or been late to work a single day in 24 years — this despite a 50-mile round trip he made each day from his home in Cincinnati to the Florence, Ky., distribution plant. For his efforts he received a bonuses totaling $9,800. He was also given a 46-inch television for working at least 35 years with Rockwell/Meritor.

Back is a son of the late William Back, a bookkeeper who worked for several coal companies in the area, and Grace Back, whose murder in Knott County on March 1, 1987 made headlines across the country.

Mrs. Back, who worked as a lunchroom cook for many years at Carr Creek school, was 75 when Alfred Grayson Thomas, then 35, and William David Morton, then 16, chased her 150 feet from her home on Sugar Branch in Redfox before stabbing and slashing her 43 times. The two killers also burglarized and burned the home of Mrs. Back, who had been living alone since the death of her husband.

Thomas was originally sentenced to death upon his conviction in 1988. However, he later agreed to a life sentence after his conviction was overturned in 1993 because of flawed jury selection. Now 64, Thomas is serving his sentence at the Kentucky State Reformatory in LaGrange.

Morton, now 45, received a less severe sentence than Thomas and was later released from custody. He was back in the news last April when he was convicted of endangering a police officer, fleeing from police, criminal mischief, and drug possession. Morton was released from prison a second time recently and placed on supervised probation for six months, beginning last week (February 1).

Thomas Back prefers to remember happier days, such as the Saturdays he spent as a youngster at the old Isom Stockyards, once a very popular attraction in Letcher County.

“On Saturdays, it was the big attraction,” Back said of Isom. “There were very large crowds and much enthusiasm. The Wardrup meatpacking company was located nearby [at Pratt Branch of Rockhouse Creek] and it was the largest buyer. Ivan Childers was the auctioneer. You could buy or sell anything there.”

Back is also proud of his time spent as a student at Carr Creek High School.

“Carr Creek won the State Tournament in basketball when I was a sophomore in 1956,” he said. “It was also the year they beat Wayland, another great mountain team, and “King” Kelly Coleman. Jim Calhoun guarded King Kelly. Jim went on to Cincinnati, where they won two straight NCAA Tournaments, beating the favorite team, Ohio State, both times.”

Back’s great-grandfather, Lewis Back, lived between what is now known as the “Twin Bridges” at Letcher. He is also closely related to the late Dr. Bert C. Bach, who practiced medicine in Letcher County for nearly 50 years before retiring in the 1960s. An uncle, Carl Bach, became known to many people who were born and raised in Letcher County for helping them land jobs in Louisville during the heavy years of outmigration in the 1950s and 1960s.

“When times were bad here he helped many Letcher and Knott people while he was at the state employment office in Louisville,” Back said.

Back is also a direct descendent of Elisha Breeding, a Virginia native who obtained 290 acres in what is now Breeding’s Creek through a land grant. According to a history of the Breeding family from Russell County, Va., Elisha first settled on Camp Branch of Rockhouse Creek in Letcher County before he moved his family to Knott County.

Back notes that Elisha Breeding was killed by guerilla soldiers fighting for the South in the Civil War after Breeding gave up part of his land to freed slaves, descendants of whom still live at Redfox.

“He got killed in the Civil War because he treated blacks so well,” Back said.