Letcher kitchen delivered 130,000 meals since May 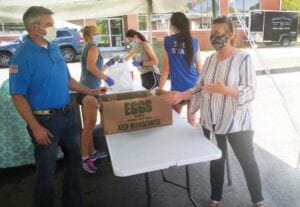 FOOD DISTRIBUTION — Kentucky Commissioner of Agriculture Ryan Quarles (left) talks with Valerie Horn of CANE Kitchen on Tuesday as teens employed by the Kitchen prepare food packages for the summer feeding program. The non-profit has handed out more than 130,000 U.S. Department of Agriculture meals in the past month.

State and federal officials said Tuesday that CANE Kitchen in Whitesburg is the “most successful community kitchen we’ve ever had” in Kentucky.

As of Tuesday morning, the non-profit organization had delivered 130,000 U.S. Department of Agriculture meals to families since the first week of May as part of the summer feeding program for families with children.

State Commissioner of Agriculture Ryan Quarles, Executive Director Warren Beeler of the Governor’s Office of Agriculture Policy, and Hilda Legg, State Director of the U.S. Department of Agriculture Rural Development Agency, together with several others visited CANE to see the distribution process in person, and congratulate leaders of the group on the milestone.

Quarles said he is already using it as an example for other community kitchens in speeches across the state, and in Washington, where he serves on the National Association of State Departments of Agriculture.

“CANE Kitchen sets the gold standard, not only in how a summer feeding program can be organized, but in what it can do for the community,” Quarles said, marveling at the line of cars circling the parking lot of the old Whitesburg High School while teenage workers loaded them with boxes of food.

Quarles noted that it uses “Kentucky Proud” foods, a state branding program for independent farmers in the state, saying it is “literally creating a new market for farmers.”

“What we’ve noticed across the state is the summer feeding programs that do well are because there is someone in that community who cares, and Valerie Horn cares,” Quarles said.

Horn runs the program out of the old school cafeteria, which Mountain Comprehensive Health Corporation leases to it for a token amount. MCHC also partners with CANE and the Letcher County Farmer’s Market for a “Farmacy” program that gives MCHC patients with certain illnesses vouchers to get fresh food from the Farmer’s Market for a reduced cost.

MCHC Chief Executive Officer Mike Caudill said there was some resistance from the Department of Agriculture when they first approached the agency about funding the kitchen, “because this had never been done before and the record of community kitchens was not that good.”

But, he said State Rep. Angie Hatton stepped in, and the department gave CANE Kitchen a chance.

“Don’t let me misstate this, but I think we are the jewel in the Kentucky Department of Agriculture’s crown,” Caudill said.

He said Horn has created a service that is more than just giving people a place to can their garden harvest. It does the summer feeding program, cooks community meals and teaches people how to cook, how to can, and how to eat healthy.

“It is truly a community kitchen, and I thank you for that,” Caudill said to Horn and to the agency heads gathered at the facility.

Legg said Tuesday that state-of-the-art kitchen equipment for CANE was a taxpayer investment through grants from her agency, and is “very, very important for eastern Kentucky.”

“This is a partnership that for the last three years has knocked the ball out of the park nationally,” Legg said.

State Sen. Johnny Ray Turner said he didn’t know what to expect when he was invited to the event.

“I wasn’t really aware of the magnitude of this,” he said, noting cars lined up to the highway and the efficiency of teens loading them.

“There’s no stigma to it. If you need some food, it’s here for you. It’s amazing,” he said.

Turner said he had been afraid the old school would be demolished when it was abandoned, but was happy to see it put to such a good use.