Letcher leads Kentucky in obesity, tied for third-highest in number of residents with Type 2 diabetes 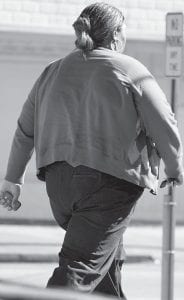 A resident was photographed last week walking around downtown Lexington, Miss., in Holmes County. The first national statistics that look at obesity on the county level show that Mississippi has three counties among the worst in the nation, Humphreys, Jefferson and Holmes. High rates of obesity and diabetes were reported in more than in about 75 percent of counties in Alabama, Mississippi, Louisiana, Georgia and South Carolina. (AP Photo)

The nation’s first county-bycounty survey of obesity and diabetes shows that Letcher County has the highest percentage of overweight people in Kentucky, and is tied for third-highest in the state in the number of residents who have been diagnosed with Type 2 diabetes, which is closely tied to obesity.

In Letcher County, 36.9 percent of the residents are obese and 13.2 percent have been diagnosed with diabetes, according to the new research from the U.S. Centers for Disease Control and Prevention.

Pike County has the highest rate of diabetes in Kentucky, 14.5 percent, followed by Floyd County’s 13.5 perecent. Breathitt County is tied with Letcher County for the ranking of third-highest.

The new research reflects past studies that show the rate of obesity is highest in the Southeast and Appalachia.

High rates of obesity and diabetes were reported in more than 80 percent of counties in the Appalachian region that includes Kentucky, Tennessee and West Virginia, according to the new research.

The same problem was seen in about 75 percent of counties in Alabama, Mississippi, Louisiana, Georgia and South Carolina.

The five counties with the highest rates were Greene and Dallas counties in Alabama and Holmes, Humphreys and Jefferson counties in Mississippi. All are small, rural counties in the west central areas of each state, and each reported obesity rates of around 44 or 43 percent. The national adult obesity rate is roughly 26 percent.

The statistics are estimates for the year 2007 — based on surveys, census figures and other information for that and other years — and include a margin of error. The obesity rates in many counties were about the same, so it’s difficult to say any county or counties was clearly the single most obese county, CDC officials said.

Counties with the lowest rates of both obesity and diabetes were out west — Boulder County, Colo., Santa Fe County, N.M., and Summit County, Utah, were at the top of each list.

Just under 13 percent of people in those counties were obese, and only about 4 percent reported diabetes, the CDC found.

There are a range of possible explanations for counties in the South and Appalachia have the highest rates of obesity and diabetes, experts said. A culture that embraces fatty, unhealthy foods and shuns exercise may be one. Genetics may be another. Income and education probably have a lot to do with it, too — people living in poor communities may not have the money to eat healthier, more expensive foods or may not have access to gyms or safe jogging trails, they said.

The Alabama counties at the top of the list are low-income, mostly African-American communities that probably ended up high on the list because the estimates assumed higher rates of obesity and diabetes in counties with those demographics, said Dr. Jim McVay, director of the health promotion and chronic disease for the Alabama Department of Public Health.

“I can’t say that those are accurate,” he said of the CDC estimates.

Some experts said they hope the county estimates will highlight the problem and persuade local officials to focus more attention on combating the problems.

“In the end, it comes down to those that have to direct resources at the local level,” said Dr. Miriam Vos, assistant professor of pediatrics at Atlanta’s Emory School of Medicine. “It’s not something that can change as easily at the federal level.”

McVay said local efforts are important, but ultimately obesity comes down to individual behavior and trying to change that. “How do you influence people to make lifestyle changes? That’s the question,” he said.

The study was published in the CDC’s Morbidity and Mortality Weekly Report.

This report was compiled from Mountain Eagle and Associated Press dispatches.