Letcher-made birdhouses are a big help to veterans

It was made from a license plate, bent to look like a mailbox, but with a hole in the end for a bird to enter. He showed it to his fatherin law, Arnold Lee Watson, who had five brothers who were veterans, and Watson had an idea.

“Why we can make those ourselves,” Meade recalled him saying.

They started making birdhouse together with Meade’s son, and that first year they collected $18,000 in donations that they gave to the East Kentucky Veterans Center in Hazard. Then the project took off.

Watson died in 2014, and Meade continued what he and his father-in-law had started.

Meade and his family donated $102,000 from the birdhouse project last year, and this year, Thomson- Hood Veterans Center of Wilmore gave him an award for his efforts on behalf of Kentucky veterans.

“I was already helping him make them, and when he died, I just took it over,” Meade said. 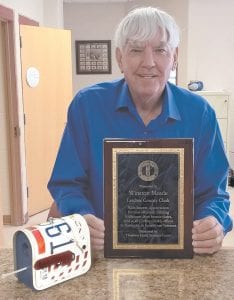 BIRDHOUSES FOR VETERANS – Letcher County Clerk Winston Meade and his family have made birdhouses to raise money for Kentucky Veterans since 2008. Last year, they donated $102,000 to the four veterans centers in the state. (Photo by Sam Adams)

Meade converted a room in the garage where he used to raise exotic animals into a workshop, and with the help of his son, his nephews and nieces, Meade turns out birdhouses for more than 60 Kentucky counties. The clerks in those counties send him old license plates and samples, and the family members build the birdhouses in their garages and outbuildings in their spare time. In all, he said probably seven different people build birdhouses every week — all except for one part.

“These flags,” he said, flipping up the red plastic mail flag on the side of a birdhouse. “Every birdhouse that’s made, I put this flag on them.”

Meade said he keeps a record of every donation, whether it’s a check or cash, and then puts it into a savings account kept by the Veterans Memorial in Whitesburg. When it’s time to donate the money, cashier’s checks are made out to the centers.

Last year, he said the project gave $32,000 to the East Kentucky Veterans Center at Christmas, and split the rest of the money among the other three centers in the state — Thompson Hood, Radcliff and Western Kentucky.

In addition, they have bought a pinball machine for the East Kentucky Center, 22 wheelchairs, and a piece of medical equipment to help get veterans who can’t walk out of bed and exercising. When it was purchased, it was for one veteran who hadn’t been able to get out of bed.

“The last I heard, he was walking around,” Meade said.

They’ve also bought a television and other items to furnish a lounge at the East Kentucky Veterans Center. All of it was purchased in memory of Meade’s father-in-law.

The veterans center showed its appreciation by naming the room the Arnold Lee Watson room.

Meade said the birdhouses aren’t sold, but anyone who makes a $20 donation gets a birdhouse free.