Letcher man was ‘wide awake’ while brain tumor was taken 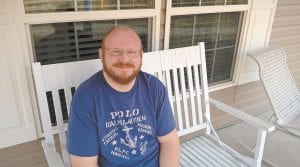 Former WYMT-TV weatherman Brandon Robinson, pictured at his home at Colson, was wide awake when Cleveland surgeon Dr. Michael Vogelbaum removed a tumor from his brain. (Photo by Sam Adams)

Brandon Robinson’s first alarm goes off at 8 a.m., and he takes an anti-nausea pill.

Most people take the medicine only on occasion, when they feel they need to throw up. Robinson takes it every day, not because he feels like throwing up, but because he knows he will after his second alarm rings at 9 a.m.

That’s when he takes his chemotherapy pill.

The third alarm, at 10 a.m., is for his regular morning medications, and to tell him it’s time to start radiation therapy in Pikeville, 40 miles from his home at Colson in Letcher County.

Robinson, director of media and communications at Southeast Kentucky Community and Technical College and former meteorologist at WYMT-TV, is 33 years old, and two months out of “awake brain surgery.”

“Back in late September, I started having what I called episodes,” he said. “I didn’t think a lot about it. I thought it was fatigue because I had weight-loss surgery in August.” 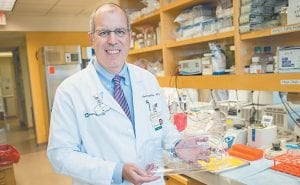 Robinson, now 290 pounds, had reached a high of 475 when he started dieting last January, and by the time he started having his “episodes,” he had dropped to nearly 300 pounds. He brushed off the thought of any illness, but while he and his wife, Stephanie, were on vacation in October, “I had the worst episode I had ever had,” he said.

He went to his family doctor, who didn’t find anything with blood tests and sent him for a magnetic resonance imaging (MRI) scan. That’s when he learned he had a 3 cm tumor in the left side of his brain, adjacent to the centers of speech and movement, and his “episodes” were actually seizures.

Two days before Christmas, he was on an operating table in the Cleveland Clinic, wide awake as a doctor cut into his brain and removed the tumor.

Robinson was put to sleep, given a local anesthetic to the top of his head, and then Dr. Michael Vogelbaum cut into his scalp and removed a section of his skull. Once that was complete, it was time to wake Robinson up again.

“I remember slowly coming out of anesthesia, and talk about a wild experience,” Robinson said. “I would have to tap my fingers, and squeeze, and I had to count to make sure my verbal skills were intact.”

All the while, Dr. Vogelbaum said, he was applying electrical pulses to Robinson’s brain to find where the centers of speech and movement were located, and where the pathways between different parts of the brain lay in relation to the tumor.

“ Interrupting those would be cause the same loss of function as interrupting the center itself,” Vogelbaum said.

“When you’re doing that (other) kind of surgery, you want to have the patient very much in twilight — as nearly asleep as possible without having to put in a breathing tube,” Vogelbaum said. “Here, we want the opposite.”

The patients are asleep during the painful part of the surgery — cutting through skin and opening the skull — but awake during the surgery on the brain so they can respond to the doctor and make sure nothing is being done that will cause impairment.

Robinson said he could tell there was sense of urgency in the operating room, but he could feel nothing at all during the time he was awake.

“I learned this after surgery, but you don’t have much pain from this because the brain doesn’t have pain receptors,” Robinson said.

With the help of a presurgical MRI and a computer, the doctor was able to map the portions of the brain where activity was taking place during speech and movement. That helped him get started, but that changed during surgery.

“As one works, a shift occurs. The brain is not rigid,” Vogelbaum said. “As you remove the tumor, the brain moves.”

Enter the latest innovation: A mobile MRI attached to tracks in the ceiling of the operating room. The machine had to be moved into place and a new MRI taken during surgery to realign it with the MRI taken before parts of the tumor were removed. Those moveable MRI machines are found only in very large hospitals.

Vogelbaum said the surgery requires a lot of training and a team that works well together, but he said much of the success requires a patient who is able to follow instructions and remain calm while the skull is opened up and a doctor is probing the brain.

“Brandon was great because he was able to help us to the mapping,” Vogelbaum said.

Robinson is back home now and has a very faint scar across the top of his head. He said he feels fine except for the fatigue and sickness from chemo, and has no impairment of his speech or movement. He’s starting to lose some hair, and he bears what looks like a sunburn but is actually radiation burn. He said his days are kept busy with therapy and naps.

“ What people don’t think about is it’s hard on the family, too,” he said.

Stephanie Robinson works evenings and nights as a radiographer at Whitesburg Hospital and sometimes works 12-hour shifts, getting home at midnight, only to get up and take him to Pikeville for radiation therapy at 10 a.m.

“By the time you get to bed and go to sleep, it’s time to start all over again,” he said.

Robinson has to keep taking the radiation therapy five days a week for five and a half weeks, but he’s optimistic. This tumor was Grade 2, one of the least serious, and Dr. Vogelbaum said that while the prognosis is different for each individual, most people studied did not have a recurrence of such tumors within 10 years.

Last week was tough, Robinson said, but it was his third week of therapy.

He’s confident it will get easier now, he said. “Everybody says the third week is the worst.”