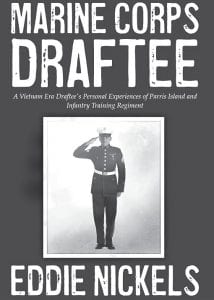 Marine Corps Draftee is the book (above left) written by Eddie Nickels of Mayking (above right).

Although Eddie Nickels didn’t see combat action while serving his country during the Vietnam War, that doesn’t mean his tour of duty was without sacrifice.

Like thousands of other soldiers who were drafted into the armed forces during that era, Nickels, a Marine from Whitesburg, was able to remain stateside. But staying in the U.S. did not mean he was living the good life.

In his new book Marine Corps Draftee, Nickels writes that he had received orders to go to Vietnam in October 1966, but because his supply unit at Camp Lejeune in North Carolina where Nickels was a fiscal requisition clerk, was so short-handed his lieutenant asked this his orders be postponed or cancelled. Although he and his wife Wanda, whom he had met at Whitesburg High School, were able to live near the Atlantic Ocean with their new son Steven, they had to do so on his lance corporal’s salary of $62.40 every two weeks — a paltry sum when you consider the couple’s monthly rent was $80. 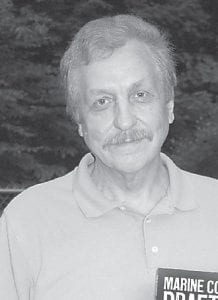 Mrs. Nickels took a job at a Rose’s Department Store in Jacksonville, N.C., to try to make ends meet, but had to quit the job because they couldn’t afford a car and the woman she had been riding to work with got a job elsewhere.

“ The whole reason I wrote the book was to show how hard it was when we were drafted back then,” said Nickels. “I knew I had an obligation to serve, but I didn’t know how rough it would get. It got to the point we were counting nickels.”

The 316-page book written by Nickels is a large-format paperback and lists for $15. It is available at John B. Adams Store at Isom and at Amazon.com. The book offers an honest look at what it was like to be a draftee from Letcher County, and retraces the steps taken by hundreds of local soldiers from the time they registered for the draft in the basement of the old Whitesburg Post Office to their first bus ride back home as a soldier.

Nickels originally signed up for and was accepted into the Air Force while a student at Whitesburg High. In the meantime, he was drafted and chose to join the Marines so he could complete his duty in two years as a draftee instead of four years as a volunteer.

Much of the book deals with the struggles Nickels and his fellow draftees encountered during 13- 1/2 weeks of boot camp at Parris Island, the Marine Corps Recruit Depot in South Carolina.

“Boot camp was tougher than I ever thought it would be,” Nickels said, adding that he weighed only 135 pounds while standing six-feet and one inch at the time. “Unless you’ve been through it you couldn’t imagine.”

Before Nickels was drafted, he worked the old Hilltop Grocery near the entrance to the Whitesburg hospital, where owner J. Don Collins paid him 80 cents an hour for 74 hours a week.

“I thought I was making big money,” Nickels remembers.

After he came out of the Marines at age 21, Nickels took a job as a salesman at the old Lewis Wholesale Company in Whitesburg, a position he kept until the opportunity for a much larger paycheck lured him into the coal mines, where he was a shuttle car operator.

Nickels was employed at Scotia Coal Company at Oven Fork at the time two coal dust-fueled methane explosions killed 26 miners and mine inspectors in March 1976. After leaving Scotia after 11 years of working there, he took a job as an insurance agent at Monumental Life in Whitesburg, where he remained for 17 years before retiring in 2005.

Nickels credits his Ma- rine Corps training for giving him the confidence to work in the coalmines, as a salesman and as an author.

“It taught me integrity, honesty, confi- dence and to show up to work on days when I don’t feel like it. It teaches you not to give up, and that anything worth having is worth working for.”

Nickels said one of the reasons he wrote the book, which he had planning to do for some time, was to remind people about how life in the military was during the days of the draft, which ended in 1973.

Nickels said he first decided to write a book about his thoughts and experiences while still going through the rigors of boot camp 47 years ago.

Nickels is happy he got the book written in the lead up to the anniversary of the Gulf of Tonkin incident that occurred on August 2 and 4 in 1964 and led to the U.S. becoming fully involved in the war effort after the North Vietnamese attacked two U.S. destroyers sitting in international waters.

“Little did I know that night of August 4, 1964, while my family was watching President Johnson on TV as he made his speech [about the Gulf of Tonkin incident] that just 18 months later I would be one of those draftees that made up the Marine Corps total of 42,633 draftees of the Vietnam War Era,” Nickels writes in the book.

Nickels says one other result of his time in the Marine Corps is his vegetarianism, which he has also practiced for 47 years.

“I vowed that if I got out of the military I would never eat another piece of meat for as long as live,” Nickels said. “You see what an influence it’s had on my life.”